Held over the weekend of Jan. 10 in Woodbridge at the Delta by Marriott Hotel, the conference opened with a keynote address from Alisha DeLorenzo, an educational and mental health consultant who founded Living YES. She is al interim deputy director of Garden State Equality. The weekend continued with nine workshops covering the Amistad Curriculum, trauma and adverse childhood experiences, LGBTQ+ inclusive curricula, multicultural literature, and TeachRock’s arts-centered curriculum. Another workshop, titled “Black Girls,” addressed the disparate treatment of African American girls and teenagers in schools. Staff from the NJEA Government Relations Division offered a workshop on how to run for political office.

The weekend concluded with the 46th annual NJEA Dr. Martin Luther King Jr. Human and Civil Rights Celebration. Keron Blair, the director of the Alliance to Reclaim Our Schools, delivered a keynote address, Tony!, Toni! Toné!, provided musical entertainment, and the late Rep. Elijah Cummings and four NJEA members were honored for their work in social justice and human and civil rights. 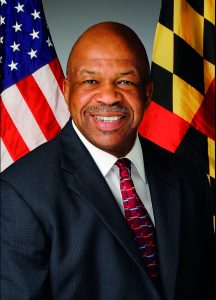 Rep. Elijah Cummings
Dr. Martin Luther King Jr. Legacy Award
NJEA Human and Civil Rights Committee
Elijah Cummings was a U.S. representative from Maryland. After graduating from Howard University and the University of Maryland, he worked in private practice for 19 years. He served as chief judge of the Maryland Moot Court Board. He was a member of the Maryland House of Delegates and speaker pro tempore before being elected to the 104th Congress in a special election in 1996. He held that position until his death last October.
He sponsored and supported many bills that made government more transparent and accessible to citizens. He was chair of the Committee on Oversight and Reform until his death.
Cumming’s family members were unable to attend the NJEA Human and Civil Rights Celebration to accept the award in person. 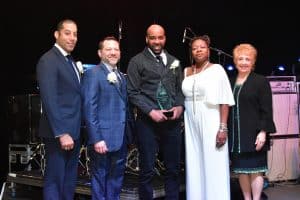 Dr. Keith Eric Benson
Dr. Martin Luther King Jr. Award
NJEA Human and Civil Rights Committee
Dr. Keith Benson is the president of the Camden Education Association (CEA). When Camden Public Schools planned to close two of its schools last year, Benson organized the community to protest the closures at district headquarters and at board meetings, demanding better for Camden’s children.
Benson gained national attention when he walked 40 miles from Camden to Trenton to lobby Commissioner of Education Lamont Repollet and the State Board of Education to provide the necessary funds to save the schools. That activism prevented the closure of Veterans Memorial Family School in Camden.
Camden parent Ronsha Dickerson, a national organizer for the Journey 4 Justice Alliance, summed up Benson’s fight saying, “We’re standing in solidarity, no more silo-ing. We’re working as one full coalition toward one ultimate goal: for us to be able to save our schools and also give our children equitable opportunities in the city of Camden and throughout the state of New Jersey.”
“This award is a positive reflection of all the great work or our CEA leadership team and the rest of our CEA family had done over the years,” Benson said in his brief remarks upon accepting the award. 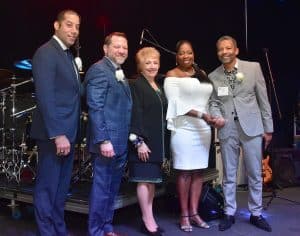 David Farrow
Judith Owens Spirit Award Recipient
NJEA Minority Leadership and Recruitment Committee
Judith Owens was the first, and so far, only, African American president of NJEA. She was elected in 1975. The Judith Owens Spirit Award recognizes members who are trailblazers for social justice.
David Farrow a middle school math teacher in Middle Township, Cape May County, was this year’s recipient of the award. Farrow works with students of color and those from economically disadvantaged households to strengthen their academics and build community connections through the SUCCESS program. SUCCESS is an acronym for Students Utilizing Community and Character to Exceed Socially and Scholastically. The group works with the local police, recreations centers, food pantries and churches.
Farrow has also used the NJEA Pride in Public Education Program to establish community conversation circles that focus on diversity. He has established workshops to engage his colleagues on discussions of cultural differences.
“Ethnic diversity, tolerance and acceptance are issues that are important to me,” Farrow said. “My mother and father instilled our family two principles: first to love God—that is to say, to love that which is good, that which is honest, that which is just. And second, but just as important, to love my fellow man as myself. I know if we will do this, bigotry, hatred, racism, and all the other isms and schisms that seek to destroy unity would cease.” 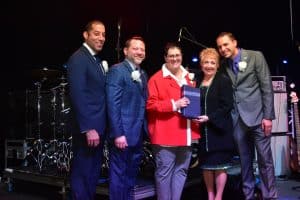 Kathryn Okeson
Equality Champion Award Recipient
NJEA Sexual Orientation and Gender Identity Committee
Kate Okeson is president of the Rumson-Fair Haven Regional Education Association. She is the founding adviser to Spectrum, the gender and sexuality alliance at Rumson-Fair Haven Regional High School. In coordination with Make it Better for Youth (MIB4Y), Okeson and her students organize events such a GAYLA, an inclusive prom held annually at area high schools in Monmouth County. She also hosts “A Day Without Art” to commemorate World AIDS Day on Dec. 1.
Okeson’s role in MIB4Y has enabled her to plan author forums, musical performances, film nights and other events that promote acceptance and empowerment. Her advocacy has resulted in more inclusive bathroom facilities at school, trainings for families, students, and staff. Okeson advocated for legislation that mandates the inclusion of curricula that recognizes the history and contributions of LGBTQ+ persons and persons with disabilities. She currently plays a central role in the development of that curricula.
“We don’t always see the outcome of what we do, but if we focused our efforts and our energies on those things that are invisible, marginalized or misrepresented, our impacts are exponential,” Okeson said. I’m not the first in any of this and there are thousands of educators in New Jersey who teach with equity, who get up every single day and center their practice on inclusion.” 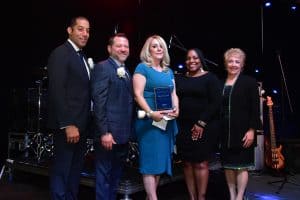 Eda Ferrante
Elizabeth Allen Award
NJEA Women in Education Committee
In 1914, Elizabeth Allen became NJEA’s first female president. Allen was instrumental in the creation of the Teachers Pension and Annuity Fund and the state’s first tenure laws.
Eda Ferrante is the president of the Wayne Education Association and a high school social studies teacher. She’s been an activist all her life, promoting women in leadership roles in education and serving as a role model for new members. She recruits and mentors women to take roles on NJEA committees and in state, county, and local association leadership. She also pays attention to the needs of parents who may wish to participate in the union by, among other things, providing child care at association meetings.
When her district tried to remove her full-time release status as association president, Ferrante fought back. She knew that her large local needed a president who could be available to support them regardless of the time of day. She fought hard on behalf of her members and sent a clear message to her board, community, and members that the Wayne Education Association is strong.

“Elizabeth Allen’s story is one of determination and persistence,” Ferrante said. “It is one of high moral character and emotional strength. She fought when the climate was not so accepting of women taking leadership positions. I believe Elizabeth Allen had a vision of equality through education, and we stand on her shoulders high enough to see the road forward and the journey’s long sought conclusion.”
Ferrante credited the “giants” on whose shoulders she stands, including family members such as her mother, her aunts, and her father; political leaders such as Hillary Clinton who have made it possible that “women seeking the highest office in the land are no longer the exception, but the rule;” and association leaders such as Passaic County Education Association President Susan Butterfield, NJEA President Marie Blistan, and NJEA Vice President Sean M. Spiller, whom she succeeded as president of the Wayne Education Association.

“Let’s leave here tonight clear and determined in the spirit of Elizabeth Allen,” Ferrante concluded. “Be clear in her example that we must do more. Clear in the vision that our work is far from completed. But clear that the path to equality is righteous, that though the road is long, with the inspiration of leaders like Elizabeth Allen and with leaders like so many of you here today in this room, that the path is one to a better tomorrow.”

A cry for support