In July, roughly 6,000 National Education Association (NEA) members assembled in Houston, Texas to debate, determine and enact policy that will guide the national union and it’s nearly 3.2 million members during the upcoming school year. The assembly, known as the NEA’s Representative Assembly (NEA RA), is one of the union’s most consequential events.

Every state affiliate of NEA, including NJEA, sends a delegation of its members to represent its respective statewide union.

While the opinions of the candidates varied, every candidate made it clear that public schools in United States deserve more funding and educators deserve to more respect. They spoke of policies that would seek to bring these two ideas to life. Each candidate spoke about the value that educators bring to their schools’ communities and of the importance of increasing the federal government’s investment in public education. 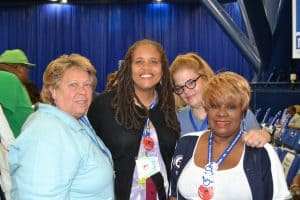 Christine Sampson-Clark, a delegate from Mercer County and a teacher in the Trenton Public Schools, was elected to a three-year term on the NEA Executive Committee.

“I’m honored to join NEA’s Executive Committee and look forward to representing the voices of my fellow education professionals in this role,” said Sampson-Clark. “I believe it is my duty to promote education excellence for our students and our educators.”

As an educator, advocate, and community activist, Sampson-Clark is dedicated to raising issues on the national agenda that are important to students and NEA members. She also is committed to quality and equity in public education and inspiring members to
work collectively.

Sampson-Clark had served on the NEA Board of Directors. Previously, she served as chair of a number of NEA boards and committees, including the NEA Board’s Black Caucus and the NEA Friends of Education Committee. She is passionate about her community involvement with the Not in My Neighborhood community advocacy group and the Rising Over Sexual Abuse (ROSA) Warriors 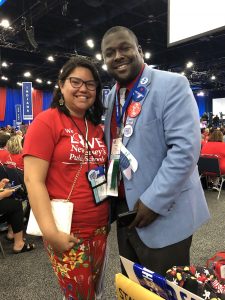 Rankin elected to NEA-Board of Directors

Ashanti Rankin, a delegate from Atlantic County, won a one-year term on NEA’s Board of Directors, representing educational support professionals from across the nation. Rankin vowed to advance NJEA’s and NEA’s missions as they push for more inclusive schools that are safe for all children.

New Jersey’s RA delegates played a game-changing role in ensuring Clark and Rankin were elected. They made signs, coordinated with delegations from other states and provided campaign materials. They organized to make their voices heard,  and their hard work paid off. 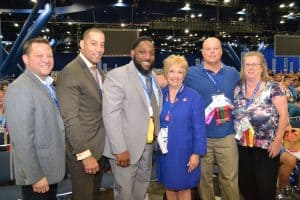 Before the RA ended, NJEA member James Frazier declared his candidacy for NEA secretary-treasurer. Frazier, a member of the Union Township Education Association (UTEA), has been an advocate for the advancement of public education for more than 20 years.

A school security officer in Union Township, Frazier has served nearly every leadership role in his local association. He was the first educational support professional (ESP) to serve as president of the the UTEA, which represents ESPs as well as teachers. If elected as NEA secretary-treasurer, he will be the first ESP in NEA’s more than 150-year history to hold national office.

“The leadership of NEA has always been certificated staff members,” said Frazier. “They’ve been courageous and inclusive of all voices within our union, but I think it’s time for our ESP members to hold these same leadership roles. As a former president of an all-inclusive local, I will  fairly and justly represent all NEA members.”

Frazier, who has previously served as an NEA Director, believes that NEA must continue to fight for equity in public education, and social, racial and economic justice for all members and all children who attend the nation’s public schools.

“If we want our schools to truly be number one in the world, we must address the economic, social and racial divides in our schools and communities,” said Frazier. “I want to enhance what NJEA is doing and I want to bring it to the national level.

Frazier will campaign around the country during the 2019-20 school year. Delegates of the 2020 NEA RA, which takes place in Atlanta, will have the chance to vote for Frazier.

Ch. 78 and ESP Job Justice – where we stand, where we are going