On a brisk February day, Branchburg Central Middle School was buzzing. Actual scientists and engineers from the nearby Johnson & Johnson campus were visiting to give sixth grade students a peek into what it’s like to work in STEM and help them with a fun—but not necessarily tasty—genetics experiment.

At a morning assembly, students heard from Johnson & Johnson engineers, including one who was an alumna of Branchburg Central Middle School, Allison Williams. She shared photos of her childhood soccer team and memories of her teachers, earning laughs and nods of recognition from the students.

The scientists talked about their daily work life and the kinds of projects they were working on—everything from first aid products and cosmetics to chemical compounds—and they answered questions about what inspired them to pursue careers in science.

For Danielle Puglisi, an instructional coach at Branchburg Central Middle School who coordinated the day’s events, hearing from scientists who shared a background with students really helped them connect the idea of a career in science with what that could look like on a practical level.

“It’s important for students to have experiences with real-life scientists because sometimes it can be hard for them to picture what that might look like as an actual career path,” said Puglisi. “When students see scientists with whom they can relate, it helps them to aspire to practicing science in the future.”

Most Branchburg students are familiar with Johnson & Johnson, which has a strong presence in the area. The company was founded in 1886 in New Brunswick and continues to be a major employer in the state. 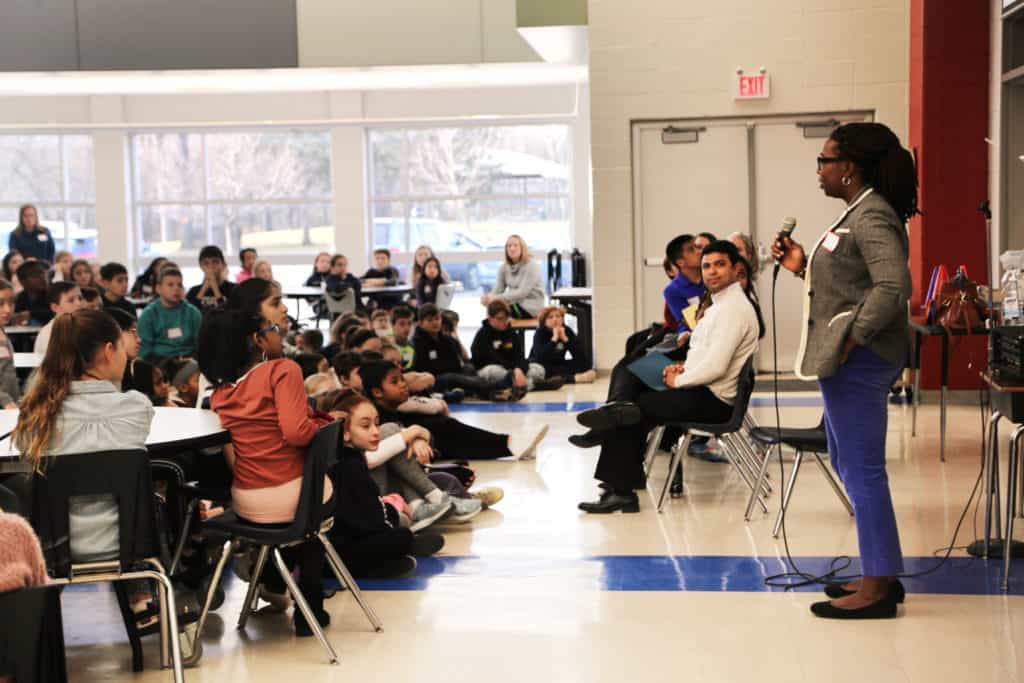 Johnson & Johnson engineer Olajompo Moloye-Olabisi speaks to the sixth-grade class about her life experiences that inspired her to pursue a career in STEM.

In fact, Johnson & Johnson scientists are currently working on one of the many COVID-19 vaccines that are being pursued.

The genetics of taste

Following the assembly, the students returned to their homerooms for a project on the genetics of taste. Students were asked to complete a bingo card naming different foods for four different categories: vegetable, salty, fruit and sweet. Students then walked around and found a buddy in the class who had written the same food, or a very similar food. One purpose of the icebreaker activity was to demonstrate that if you like or disliked similar food, it might be that you shared similar genetics.

Johnson & Johnson scientists assisted in the activity, which mostly consisted of watching the sixth graders network like professionals as they tried to make connections with their classmates.

After the bingo exercise came the big thrill of the day when students participated in an experiment on the genetics of bitter taste.

Students had learned that the way we taste things can vary depending on our genetic makeup. About 25% of the population has a set of genes that cause an intense dislike to a taste receptor gene, known as TAS2R38.

Some people taste certain foods such as asparagus, kale, and brussels sprouts, among others, as more bitter than others. This can lead them to avoid these foods and, in fact, can reduce their consumption of vegetables overall, according to a 2014 study conducted by the University of Connecticut. The difference was significant—those with the greater sensitivity consumed 200 fewer servings of vegetables over the course of a year.

Knowing this about yourself could help you overcome your natural aversion and seek out other vegetables that are more palatable or research different ways to prepare these green vegetables to enhance their sweetness.

In small groups, students were given a piece of litmus paper with a nontoxic, bitter taste simulator called phenylthiocarbamide (PTC). Students stood with their backs to each other so that they would not influence each other’s responses to the PTC. At the count of three, the students put the paper in their mouths and tasted the bitterness.

“Depending on the students’ genetics, they may have exhibited an unpleasant facial response and really not liked it, a mild response, or no response at all. We then follow up with more about the genetics behind it,” said sixth grade science teacher Shannon Heaney.

Students then divided themselves into the three groups, providing a visual representation of the breakdown. The Johnson & Johnson scientists assisted students as they completed a worksheet on the genetic experiment. 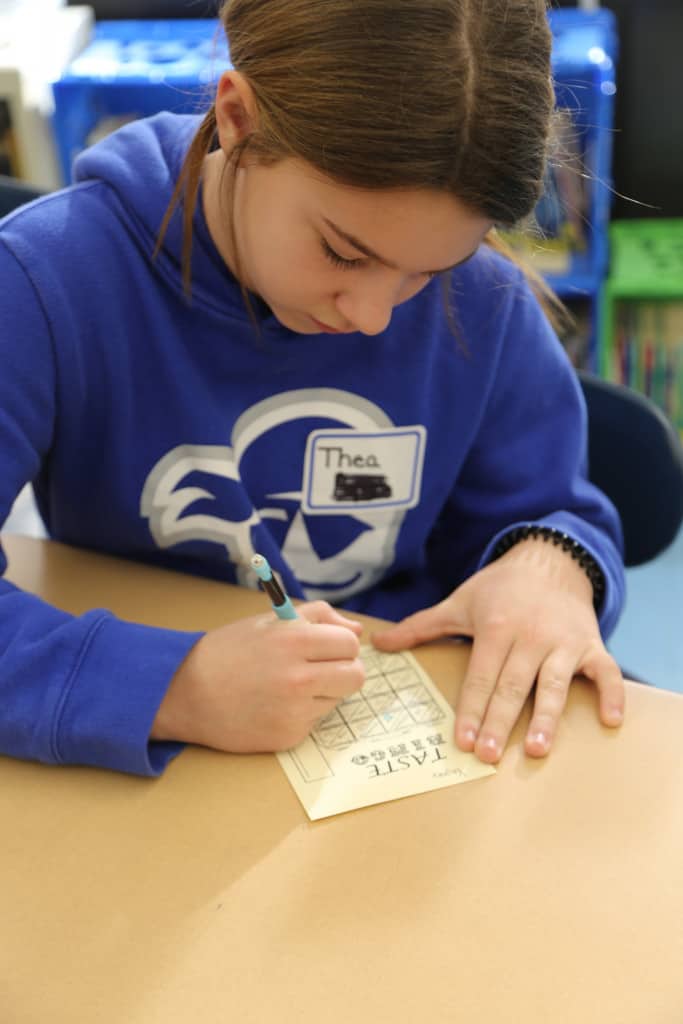 In preparation for a game of “Taste Bingo” with her classmates, sixth-grader Thea P. fills out her game board with foods she likes that fall into the four different taste categories.

At the end of the day, all of the sixth-grade students were brought back together in the gymnasium where they viewed the schoolwide results graphically and had an opportunity to hear from more Johnson & Johnson scientists.

“Before today’s program, I think students had some knowledge of what scientists and engineers do but hearing them talk about the different branches of science and engineering and what they do each day really gave the students greater context,” Puglisi said. “These kinds of connections between schools and companies can really help to build students’ excitement about pursuing careers in science.”

“We started this collaboration a few years ago when one of our former STEM coaches, Maggi Emmons, made a connection with Robert Miller, a Johnson & Johnson supply chain senior manager,” Barbosa said. “Ever since, Johnson & Johnson professionals have been coming to the school to bring science to life in authentic ways.”

Authentic learning is very important to Barbosa and the staff. All of the eighth-grade students participate in a social change project, and the school hosts an annual enrichment day where students and staff choose a topic and learn about it together, connecting educators and students as learners. 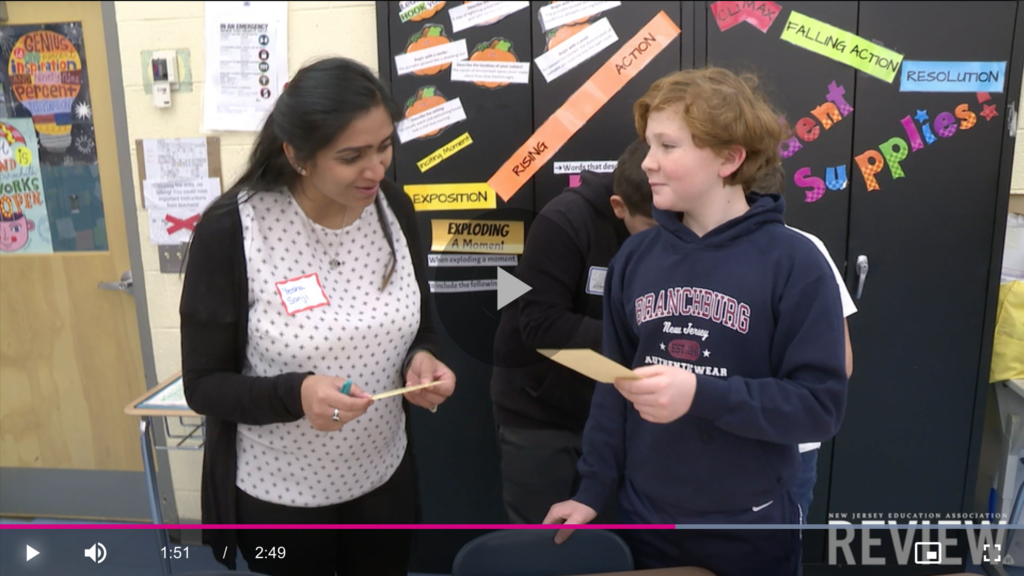 Bringing outside organizations, such as Johnson & Johnson, into the school community to collaborate on projects together is more than just an exercise in authentic learning, it’s also a way to build connection among shared values.

“One of the great things about Johnson & Johnson is that they are focused on having women in STEM and having a diverse workforce,” Barbosa said. “Those are goals that we have, as well. We want all our students to feel comfortable and confident with who they are and to accept and celebrate the diversity that is all around us.”

While this event, which was held pre-pandemic, cannot be replicated in the same way this year, thanks to technology, there are still many opportunities to bring in subject area experts. Puglisi encourages other districts to develop relationships with practitioners to help enrich students’ learning.

“Learning experiences like this can really spark students’ love of science because they’re learning in a different way, and they’re getting to talk to real-life professionals who can share with them what they were doing in middle school,” Puglisi said. “Maybe the scientists and engineers weren’t interested in science in sixth grade, but then something happened and there was a switch that turned.”

State Board of Education and acting commissioner field questions at convention