Early Career members gather for an annual networking event at the NJEA Convention.

NJEA and its local association affiliates are forces to be reckoned with. New Jersey public school employees have stronger salaries and better benefits than our counterparts in most other states. This could not have been accomplished without the hard work and dedication of thousands of NJEA members over the past 166 years. We owe what we have to those who came before us and upon whose shoulders we stand. If we want to maintain our progress and advocate effectively for better schools for our students and better working conditions for ourselves, we need to invite our newest members into the fold.

Undoubtedly you have heard, and maybe believe, some of the most prevalent stereotypes of early career members: “They’re disinterested and unengaged,” “They’re apathetic and don’t understand the importance of the union.” The reality is our early career members are one of our union’s greatest untapped resources.

The National Education Association (NEA) identifies individuals in their first five years of membership as “early career” members. This group is dynamic, energized, and eager to be engaged.

As of 2018, early career members made up 25% of NJEA membership. That percentage is likely  to grow as more of our veteran members move into retirement, and hopefully, to membership in the New Jersey Retirees’ Education Association. One of our goals as an organization must be to recruit these potential members and groom them for eventual leadership roles. The future of the NJEA depends on us accomplishing this goal, and the Early Career Leadership Network is set up to help us achieve it. 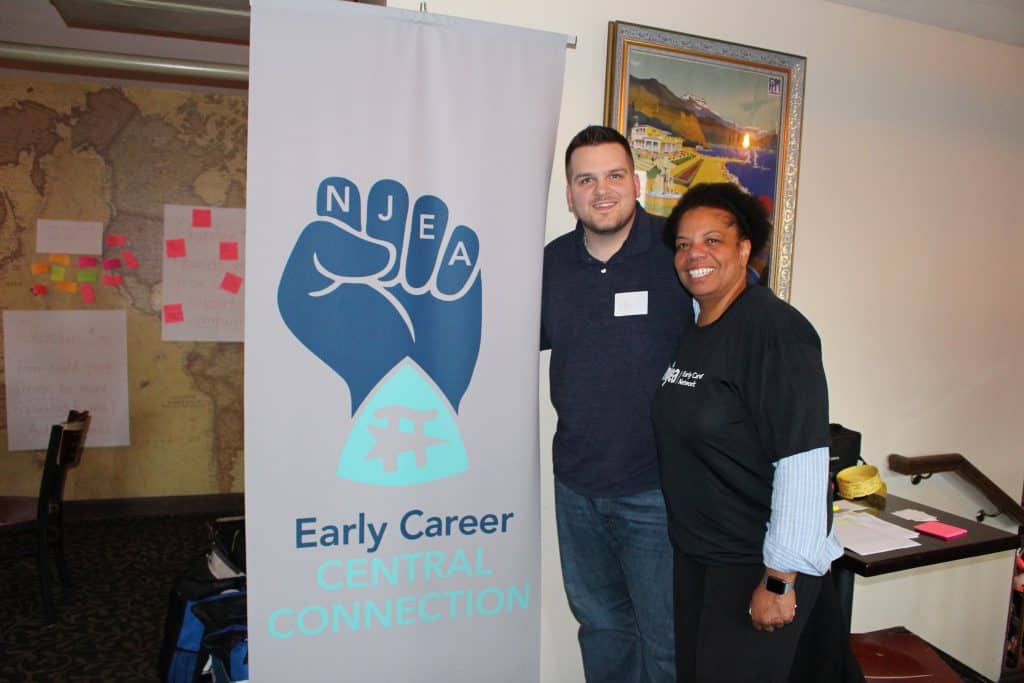 If you’ve attended the NJEA Convention, you may have seen the sign on Main Street NJEA with a fist and the unity symbol. That area is the convention home of the NJEA Early Career Network, the space for public school employees in their first five years of work.

To help better engage these new—and usually enthusiastic—members, NJEA has organized a group of members, the Early Career Leadership Network or ECLN, to plan events for our early career members. The ECLN is relatively new in the long history of NJEA. It was first established five years ago. In that short time, the ECLN has grown from three member-organizers to more than a dozen member-organizers across the state committed to bringing our early career members into the fold.

Over the course of the last five years, the ECLN has designed events and opportunities for early career members to engage with the union in meaningful ways. The events have covered a wide range of topics including understanding your paycheck, how to engage students in difficult conversations, and how to advocate for ourselves and our colleagues. These events have been met by our members with excitement and lots of questions.

Many early career members have questions about their job, and NJEA can be a source of good information for them. That’s why it is vital to make sure that early career members feel supported and see themselves as part of our union. This realization, along with a few others, has helped us better understand the best ways to meaningfully engage these members.

Early career members want to know about everything: what works best in their classrooms or workspaces, how things work in their school districts, what all those abbreviations on their paychecks mean, and why unions engage in political action.

Early career members are almost always in search of ways to improve their practice. Professional and career development can, and should, be a crucial component of how we as an organization engage our early career members. From statewide conferences to local association sessions, if we can demonstrate to new members that the NJEA is a vital resource of information, they will more readily turn to us for support.

At early career events, we talk about it all: comparing assessments between our districts and buildings, talking about different observations methods and how we can improve as educators, working with the different members of the whole school team and more. Early career educators are focused on their craft and getting better, and asking veteran members questions is one of the best ways to do that.

If we want to maintain our progress and advocate effectively for better schools for our students and better working conditions for ourselves, we need to invite our newest members into the fold.

As the ECLN, we do our best to address these questions, but we sometimes struggle with the specifics of individual districts. This is where local leaders can step in and be an informational resource for their early career members.

Another question so many early career members will have is about politics and how NJEA engages in them. They ask, “Why do we need to get involved?” and “What do politics have to do with education?”

As public employees, we demonstrate how almost everything we do in our public schools gets decided by politicians, which is why our advocacy as public employees and the members of the most powerful public-sector union in the state is so important. As early career members, some may not understand why Chapter 78 is important. It is vital to educate members about health care costs.

One dramatic way to show the cost of Chapter 78 is to compare paychecks before and after the enactment of Chapter 78. Many early career members do not remember a time when health care costs were not as steep as they are now.

Early Career Leader and Highland Park Legislative Action Team chair Hannah Pawlak educated members about Chapter 78 with a “Bad Bill Brunch.” Members used a calculator to find out how much they would save if Chapter 78 were revised. Armed with that information, the early career members wrote postcards to state lawmakers on legislative committees considering relief legislation and sent emails to their local legislators. This not only engaged members in political action but showed the early career members how important it is to get involved in political advocacy. It benefits their students and our co-workers. 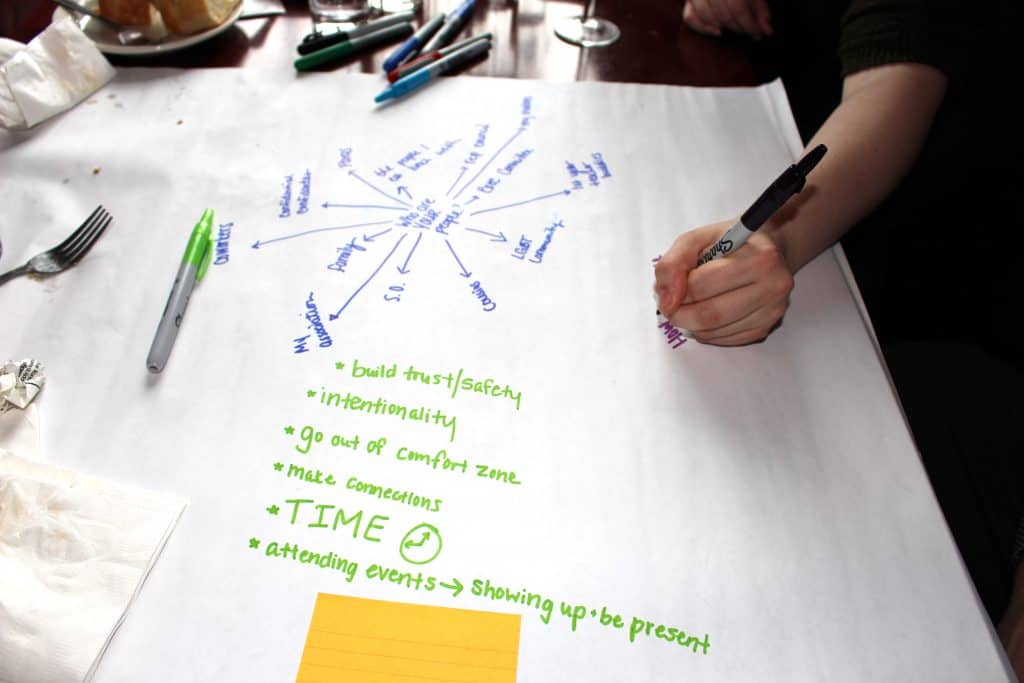 At an early career event, members record thoughts during a world café discussion.

Early career members are not all young

This information is crucial in how we structure our outreach and the different types of opportunities that we offer. We must create and sponsor events that these members can attend and find meaningful. Members who are in their second careers might be more concerned about pensions than members who just graduated from school.

When you are brainstorming ways to engage your early career members, make sure you are thinking about all of these members, not just teachers straight out of college. By building events that meet the needs of all early career members, we can more successfully engage one of NJEA’s greatest untapped resources.

Around the country, union membership is on the rise and people’s views of unions are becoming more positive. According to a 2018 Gallup poll, 64% of Americans had a favorable view of labor unions; this is up from 61% in 2016 and 47% in 2007. This positive upswing, when coupled with increased social and political engagement across the spectrum is an opportunity for NJEA and its local association affiliates to increase our ranks and build leadership with an eye to the future.

In the ECLN’s conversations with early career members, we have found that they want to be actively engaged in unionism. Time and time again, first-time early career event attendees provide feedback saying, “I had no idea that this type of event was offered by NJEA” and “Let me know when your next event is so I can bring some of my colleagues.”

By inviting early career members into NJEA spaces, we welcome them into unionism and can provide opportunities for them to grow their involvement. By providing a door into the union, we can invite members in and then provide them with opportunities to get further involved. By inviting these members into the union—and keeping them—we can ensure that the NJEA is able to remain a strong organization that serves its members well.

Early career members want to get involved, but don’t know how

One of the most common reasons educators avoid getting involved in their union is fear of retaliation from their school and district administration. We’ve all heard it: “Don’t get involved until you’re tenured.” As early career leaders, we want to change that narrative. There are many ways to get involved as nontenured educators that are not considered threatening.

One of the most beneficial to the community and the school is being involved with NJEA Pride in Public Education and NJEA Families and Schools Work Together for Children (FAST). These grant-based programs provide funding for activities to help bring the school district, the local association and community together.

Being part of Pride and FAST allows early career members to get to know the community where they work a little better. Getting involved in Pride and FAST bolsters the out-of-the-classroom resume—something most administrators enthusiastically support. It also provides extracurricular opportunities for early career ESP members who often are not provided opportunities in their districts to advise clubs, coach sports or become involved in community outreach.

Mariah Belber is an advanced learning program teacher at Bartle Elementary School in Highland Park. She is the Pride chair and webmaster for the Highland Park Education Association. Belber is a member of the NJEA Early Career Leadership Network. She can be reached at belber.mariah.elizabeth@gmail.com.

Robert Mangel is a social studies teacher at Linden High School and the vice president of the Linden Education Association. He is a member of the NJEA Early Career Leadership Network. Mangel can be reached at robmangel@gmail.com.