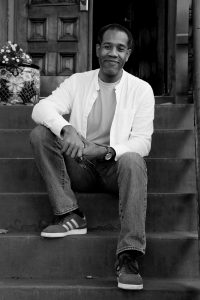 Growing up in Willingboro, Gregory Pardlo did not dream of becoming a Pulitzer Prize-winning poet. He saw the people in his working class suburban community wearing suits and carrying attaché cases, and he figured that when he grew up, he’d do whatever they did all day.

But his path ended up being something very different, even though probably no one could have predicted it at his fourth-grade career day.

After graduating from Willingboro High School, Pardlo entered Rutgers University-Camden and earned a bachelor’s degree. He went on to New York University for a master’s in fine arts as a New York Times poetry fellow, and earned another MFA in nonfiction from Columbia University. He is now a doctoral candidate in English at the City University of New York and he has come home, in a sense, as a tenured professor at Rutgers-Camden.

With all this talent, dedication and drive, why is it extraordinary that Pardlo grew up to be a poet? In part, it’s because he successfully navigated a system of public education that—while excellent—does not emphasize the study of “the life of the mind,” as Pardlo puts it.

Too often, public education seems to prioritize conformity to a certain definition of success that appears to exclude careers that focus on “the life of the mind.”

Perhaps it is the American cultural drive toward careers such as doctor, lawyer and engineer, careers that log hours, statistics and measurable achievements.

Careers with less tangible—but vastly important outcomes—are less valued in part because they are less measurable. Until the bureaucrats get their hands on them.

This push toward testing as a way of measuring success in public education has been growing steadily over time.

It has been led by people who have a deep mistrust for “the life of the mind.” Children are not linear. They will grow and change and learn. They will face challenges and sometimes trauma. They will be extremely susceptible to slight atmospheric changes in their lives, in their family’s lives, and in their schools.

Yet the test pushers believe that there is one way of defining success: everyone must be measured and found to be at the appropriate, standards-conforming level.

But what if that’s not what success looks like at all?

Too often, public education seems to prioritize conformity to a certain definition of success that appears to exclude careers that focus on “the life of the mind”

For NJEA members, clearly it does not. We have been at the forefront of the fight to ensure that bureaucrats do not rob children of a love of learning, because no child ever said, “Today was the best day ever! We took tests all day.”

We are still the best spokespeople for sanity in the face of testing insanity. New Jersey’s public schools were named by Education Week as the best public schools in the nation. Their rubric took into account test scores as well as graduation rates, school funding and much more.

We cultivate the best in our students, and help to ensure that they are not only well-educated but also well-adjusted, by seeing them clearly: seeing their possibilities and potential and giving them the kindness, guidance and support they need to see where an interesting path takes them.

At the NJEA Convention, Pardlo was named the 2019 Award for Excellence winner, presented to graduates of New Jersey public high schools who have demonstrated exceptional leadership in their fields of expertise. That means that educators across the state chose him to be an example of the best that we can be, the best that our schools can produce, and the kind of human being that anyone would be proud to know. He didn’t have to take a test to earn this distinction. He did it by forging his own path and making a way for others who will come after him.

Pardlo is a sign of our success. By any measure, by any estimation, we must be proud of a system of public education that helped cultivate him and his talent, and we must preserve the ability of educators to encourage the poets among us.

Jack “Mr. NJEA” Bertolino was a legend to staff, leaders and members

NJEA seeks next class of the Bolivar Graham Apprentice Program