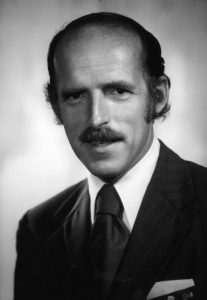 Totten’s teaching experience spanned grades five to 12. He began teaching in Hillsborough but spent most of his career at New Brunswick Senior High School. An English teacher, Totten created the New Media and Humanities courses at the school.

Totten grew up in a farm in the Neshanic section of Hillsborough, where he attended a two-room elementary school. He graduated from Somerville High School in 1950 and earned a bachelor’s degree from Hiram College in Ohio.

In his youth he hitch-hiked across the United States and mined gold in Alaska.

Prior to becoming NJEA president, Totten served the association as vice president for three years.

Totten held a lifetime membership in NJEA and continued to be involved with the association after his presidency. He attended nearly every NJEA Convention up until 2016.

Totten was committed to doing the very best for NJEA members.

“I will go to my grave saying, ‘I tried.’ I would rather fail than not try anything,” Totten told the NJEA Review in September 1977.

Teach about the census