Most teachers don’t get rock star treatment, even though they deserve it. But Lopatcong Middle School sixth grade math teacher Gary Hank and Anne Bercaw, who retired from the district in 2014, are living their rock and roll dreams.

Since 2007, Hank and Bercaw have been performing as the band 2 + 1 Math Rocks! at school assemblies, family fun nights, educator in-service days, including the Association of Mathematics Teachers of New Jersey’s annual conference, and community events throughout the Lehigh Valley and northwestern New Jersey, as well as at the Mayfair Festival of the Arts, ArtsQuest Center at SteelStacks, and Musikfest, one of the largest music festivals in the nation.

Go behind the scenes with 2 + 1 Math Rocks! in this exclusive NJEA Review video.

But Hank and Bercaw consider themselves educators first, and musicians—or math rockers—second.

“Growing up here in Lopatcong, I did not like math,” Hank admitted. “When I became a teacher, I realized that I could make a difference.”

But even before education and music, Hank had another passion: baseball. He attended Lock Haven State University and was on the baseball team. But when he was cut from the team, he realized he needed to pursue a different path. A class on children’s literature inspired him to pursue a career in education, and the rest is rock-and-roll history.

“I don’t know where this passion for music came from,” Hank said. “I grew up in a sports family; no one played a musical instrument. But my older brother had a guitar that he never used. From the time I was six years old, I’d play around with his guitar. I still collect vinyl albums.”

Hank has more than 1,500 albums at home; his wife considers him a vinyl hoarder. But that vast musical knowledge is what enabled him to connect music and math.

“I started teaching in 1984 at Phillipsburg High School,” Hank said. “I was 21 years old, teaching math to juniors and seniors. They were very close to my age, and it was pretty tough. But I had the support of my colleagues and administrators. After a few years, I moved to Lopatcong Middle School. I started bringing the guitar into the classroom around 1999.”

Hank was teaching a poetry section in language arts and some students suggested that he put some of the poems they wrote to music. Eventually, one song became adopted as the school’s D.A.R.E. song, which was the anti-drug and alcohol abuse program.

Other teachers and staff in the district also were musically inclined and would perform at talent shows and other events. When Hank saw his students struggling with some difficult math concepts, he began to wonder if incorporating music into his math lessons could help. His first song was about fractions. 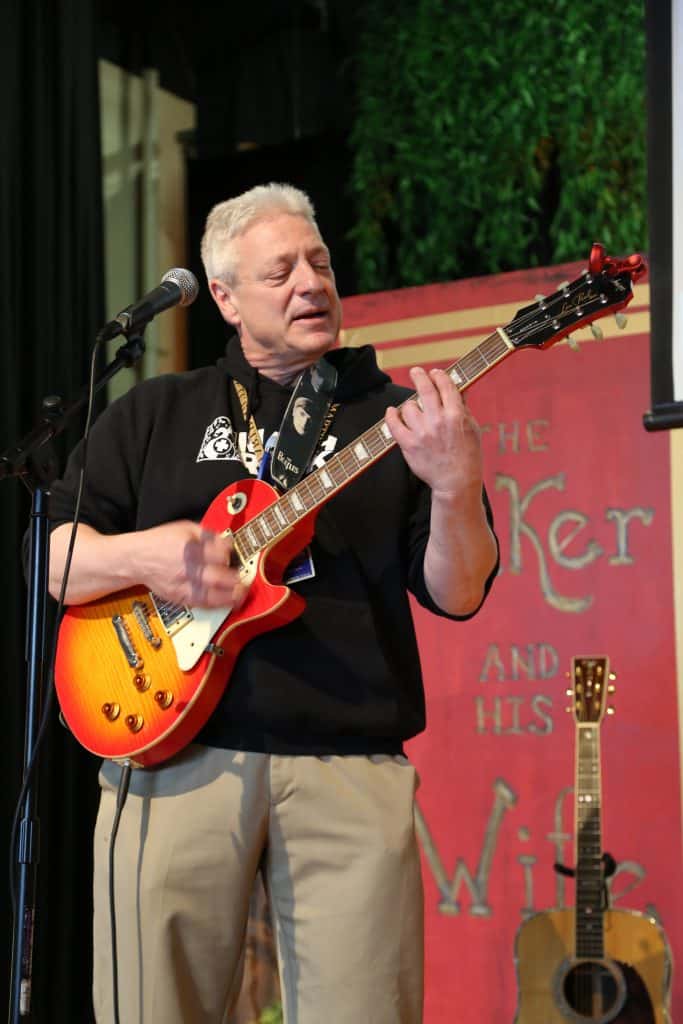 Gary Hank has been performing and writing songs to teach math concepts for more than 20 years.

A band is born

Hank and Bercaw, who also grew up in Lopatcong, have known each other nearly all of their lives. When Hank moved from seventh grade to sixth grade math at the middle school, Bercaw’s special education classroom was right across the hall. Bercaw, who plays bass and is a classically trained flutist, jumped at the chance to collaborate.

“I love being a part of this,” Bercaw said. “Gary would poke his head in my classroom door and ask what my plans were that day. We almost always found a way to bring our students together. It meant a lot for my students to get to sit with their friends and listen to and learn these math songs.”

sixth grade students, Hank and Bercaw rocked the house. Students wore the band’s T-shirt and buttons and clapped and sang along to the songs. Cafeteria staff who were preparing lunches stopped to listen and applaud. Following the show, students lined up for Hank and Bercaw’s autographs.

The teachers and school employees know the songs Hank and Bercaw’s songs are based on, but the students often do not. One former student told Hank that whenever she hears the Neil Diamond song, “Sweet Caroline,” she sings the words to Hank’s version, “Just Simplify,” which teaches students about using greatest common factor to simplify fractions.

“The kids go crazy over that one and always sing along,” Hank said.

“Estimating in Paradise,” a take on Jimmy Buffet’s “Cheeseburger in Paradise” is about estimating using rounding but Hank confesses that every time he plays that song, he gets hungry.

Bruce Springsteen, of course, is a popular choice. Springsteen’s song, “Hungry Heart” is transformed into “If I Forgot to Tell You” to help students understand how to use renaming to add and subtract unlike fractions.

“I have these kids brainwashed,” Hank joked. “When they come into class and we do a lot of fractions, decimals, and percents, I say to them, ‘If I forgot to tell you,’ and they immediately respond with, ‘the denominator stays the same.’ It’s very catchy. I must say it a thousand times.”

They have used songs from musicians such as Billy Joel, REM, Lynyrd Skynyrd, Spin Doctors, and many more, but Hank’s favorite band, by far, is the Beatles, and their song catalog reflects that.

“I’m kind of a Beatle fanatic,” Hank says. “My wife will say I’m obsessed. We have a lot of Beatles-based songs.”

“Nowhere Man” by the Beatles is one of 2 + 1 Math Rocks! best-known and earliest songs. It’s called “Powers of Ten” and uses basic facts and zero patterns to multiply and divide decimals.

Hank and Bercaw enlist the help of another retired colleague, Valerie Mamrak, who runs the PowerPoint displays while they play, showing the math concepts, lyrics, and fun art to entertain the students and help reinforce the concepts.

“It doesn’t seem like music and math go together, but they really do,” Hank said. “I am a math teacher, but I didn’t care for the subject as a kid. If I would have had this as a kid, I think I would have mastered these concepts and enjoyed math much more. Maybe I would have even pursued math further!” 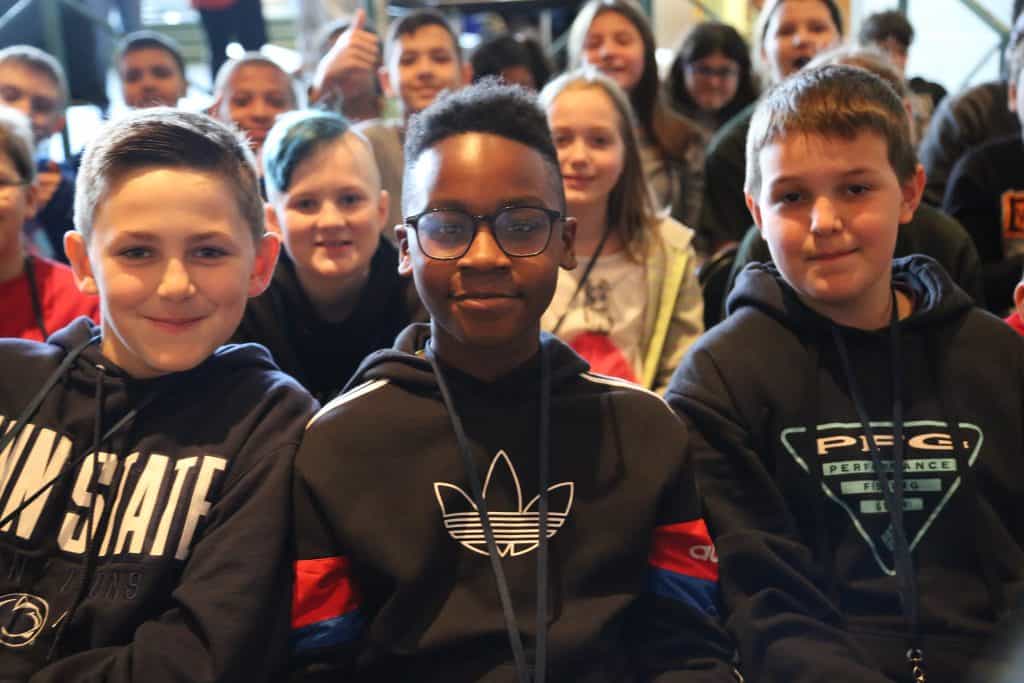 Administrators have been very supportive and encourage Hank to share his talents.

“Using music is a great way to reach students who learn in different ways,” said Rick Bonney, principal at Lopatcong Middle School. “Our teachers have the creative freedom to find strategies that work for our students and implement them. Every staff member has a hidden talent that may be something they do outside of school or with their family. We welcome them bringing those talents and passions into the classroom. That makes the educator feel more creative, and it really inspires students.”

Bercaw echoes the importance of educators sharing their passions with students.

“When middle school students sense that you care about them, they come alive,” Bercaw said. “It’s a tough age; when educators share their talents and passions with their students, it makes students realize they’re important and valued. They see us taking a risk, flubbing a note, being creative: that makes them feel safe about showing their true selves.”

Hank and Bercaw have gotten their own children involved. Bercaw’s son, Ryan, began drumming with the group when fellow educator Kenney Lutz left Lopatcong to become vice principal in the Newton School District. When Ryan went off to college, Hank’s son, Alec, picked up the sticks and has been drumming with them ever since. Hank’s other son, Cory, has

played lead guitar on the band’s “Gee, I’m a Tree” and “Squared²” CDs.

They are eager to share these songs with other educators and encourage them to use 2 + 1 Math Rocks! resources, which are aligned with New Jersey Student Learning Standards, to reach their students. Hank proudly points to a file cabinet full of thank you cards from students, parents, and educators across the United States, Canada and the United Kingdom.

2+1 Math Rocks! has all their music on their website, 2plus1mathrocks.com, as well as YouTube, Spotify, iTunes, Pandora and others. They are happy to share their content and are available to play school assemblies, music festivals, and other events. They also have CDs and DVDs for sale.

In addition to their music, Hank uploads lesson plans and records his lessons and posts them on Google Classroom and his YouTube page.

“It helps students stay with the class when they miss school, and it helps parents understand how we are teaching math concepts,” Hank said. 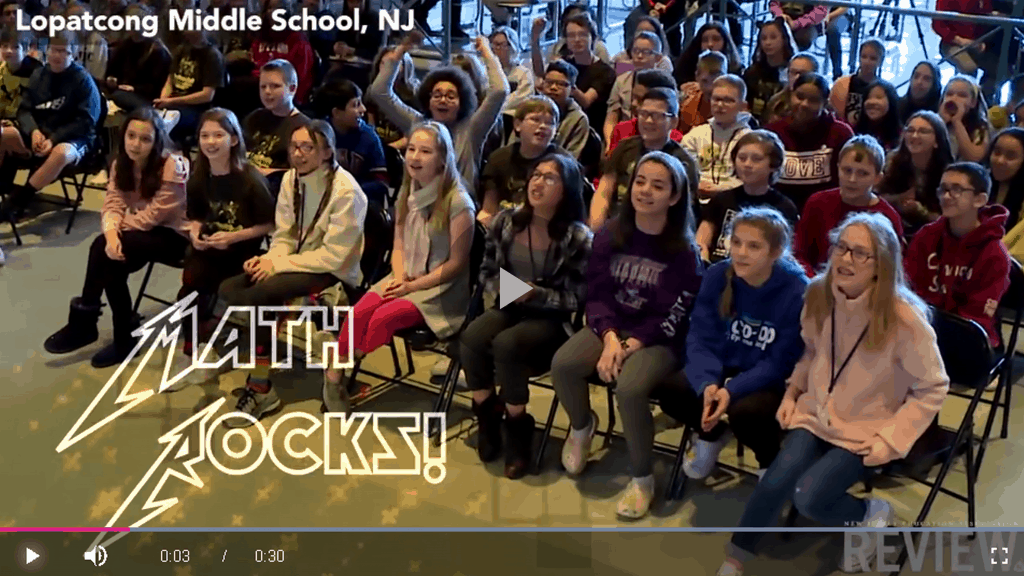 These resources have been beneficial to Hank with the move to online instruction, and he is eager to share them with other educators.

“To this day, I have a song in my head constantly,” Hank said. “If you put math concepts to a song, it’s always going to stay with you. I feel like using music to teach these concepts really reaches students in ways that other methods do not. And the best part is, they are excited about learning them!”

“Music is essential for everyone,” Bercaw said. “Research has shown that humans process music in several different areas of the brain. Basically, we are hard-wired for music and you see that when we introduce it into our lessons. Behavior, self-confidence and engagement improve when we bring music into the classroom.”

Hank and Bercaw have continued to create new music, even during the coronavirus pandemic. On their YouTube channel, TwoPlusOneMathRocks, they posted a message of hope and laughter for educators, students, and their parents based on the Mamas and the Papas song, “California Dreaming.” The new song, “All I Want to Do … Is Go to School Today” includes the lyrics: “All the kids are home, mom is turning grey.”

“Now, more than ever, we need to inject some fun into learning,” Hank said. “Students, their families and educators are struggling with an abrupt transition to remote instruction, but some things haven’t changed at all: math should be everyone’s favorite subject. Personally, it makes me break into song!”