In late February, the NJEA Review went to Newton High School in Sussex County to cover a story about a really cool robotics program. The students, teacher, mentors and parents gathered from 6 to 9 p.m. almost every evening to work on a robot that would be entered into Infinite Recharge, an engineering competition. Other students proudly showed off an electric car they had built. They raced the team’s Power Racing Series EV down the hallway and talked about the next car they planned to build, all with an eye toward taking first prize.

James Hofmann, Newton High School technology teacher and the founder of the program, proudly guided guests around the STEM (science, technology, engineering and mathematics) lab, pointing out interesting machines and encouraging everyone to share what they were working on: from coding to marketing to building to public relations to sponsor relations. 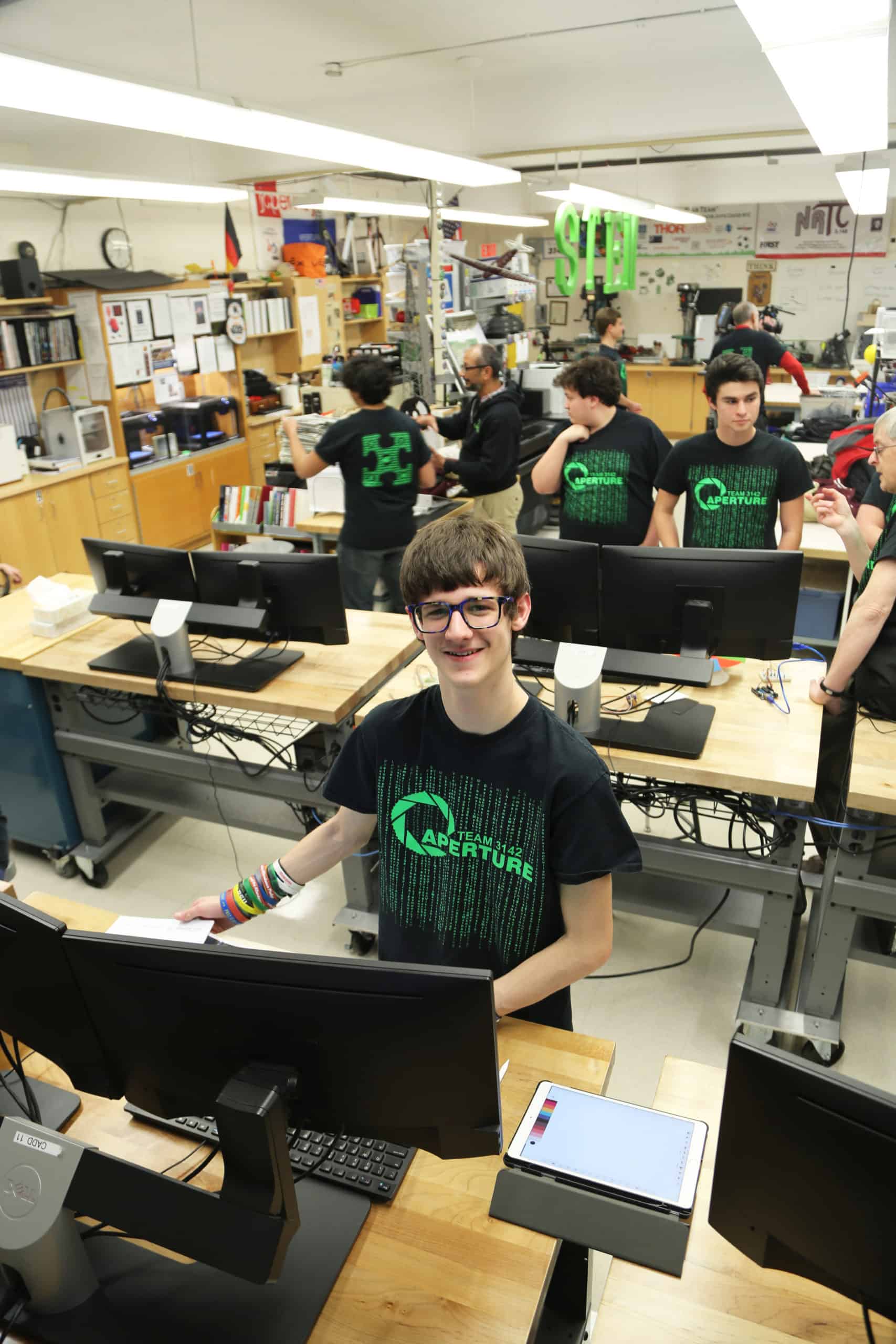 Josh Murray is the business team leader for the Newton Robotics Team.

Hofmann persuaded reluctant mentors to share their experiences volunteering with the program and why they donated so much of their time to building with students in the lab. He ensured every participant got a chance at the spotlight, particularly Harvey Fein, age 85, who proudly watched his protégé, junior Edward Holder, pitch the electric vehicle. They were a real team, and they were full of excitement about their competitions and upcoming presentations.

And then everything changed.

Just a few weeks away from the competition they had been working toward all year, COVID-19 was declared a global pandemic.

Schools moved to remote learning, competitions were postponed or cancelled, and this kind of in-person collaboration was no longer possible.

It was also the moment when STEM and the values Hofmann exhibits in the classroom became one of the most powerful teachable moments Hofmann’s students are likely to ever encounter. 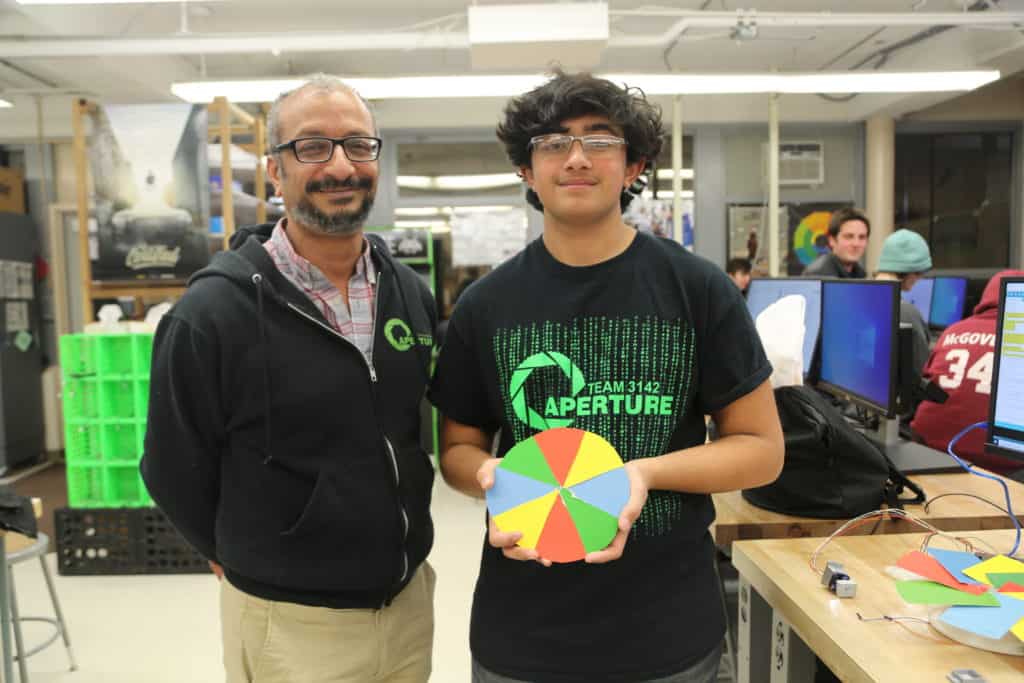 Many families, including Mitesh and Arjun Amin, participate together.

When am I ever going to use STEM?

Every educator has heard the familiar question: when am I ever going to use this? From math to English to art to physics, it can be one of the most frustrating, and potentially unanswerable, questions. But that question was resoundingly answered for Hofmann’s students as they watched their teacher spring into action.

Hofmann is a networker; he is a builder of bridges in both the literal and figurative senses. He connects people and thrives on that connection. He is also someone who believes in the power of science and engineering to improve people’s lives.

In the early days of the pandemic, as he listened to his son, Justin, a third-year medical resident at University Hospital in Newark, describe the serious lack of personal protective equipment (PPE) and how dangerous and transmissible COVID-19 is, he wondered what he could do.

The answer came thanks to Rohan Sawhney, a Rutgers University medical student who had reached out to Hofmann years earlier to brainstorm ways that technology, including 3-D printers and other engineering gadgets, could be used in hospitals.

Sawhney asked if Hofmann would be willing to help build PPE using 3-D printers. Sawhney sent a design for a plastic shield that had been developed by Prusa Engineers and Hofmann got to work.

With administration approval, he used the 3-D printers at Newton High School’s STEM lab, as well as his own 3-D printer to begin production. It took five hours for the machines to produce a plastic 9-inch by 9-inch face shield that could be disinfected and reused, but many, many more were needed. So Hofmann reached out to his network to ask for assistance building the PPE, fundraising and sourcing materials. 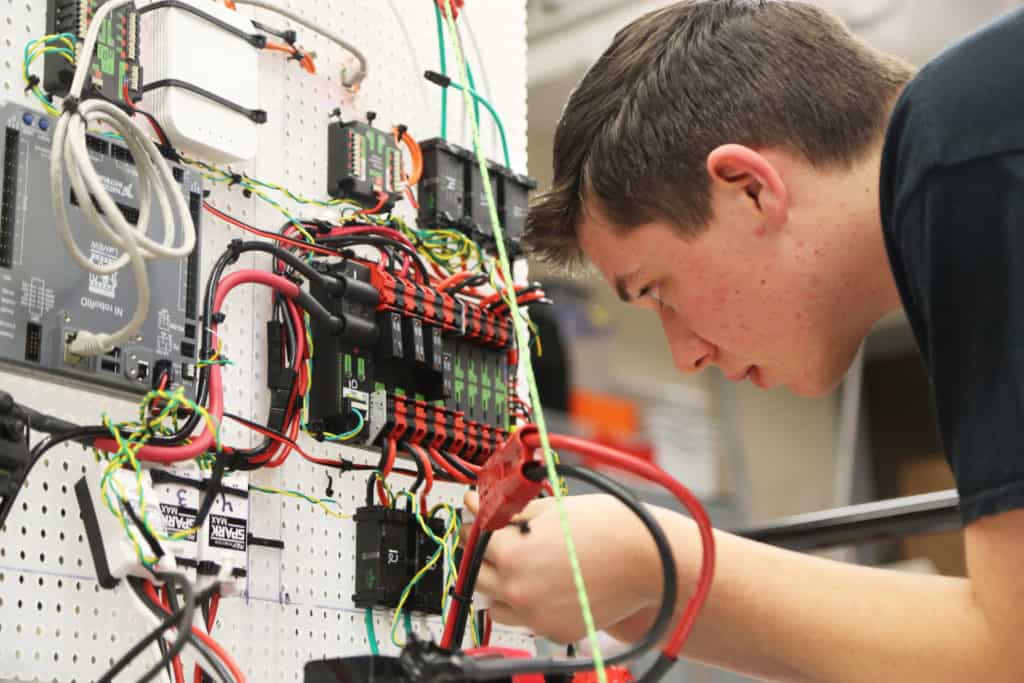 Alex Cable, the CEO of Thorlabs, a frequent and loyal collaborator with Newton’s robotics team, was the first to respond. He volunteered Thorlabs’ 3-D printers, helped locate the necessary plastic material for the clear shields, and committed engineering staff to work on the prototype.

Ronetco ShopRite quickly offered to cover some costs for the project. Colgate Palmolive, MIRA Plastics, and Picatinny Arsenal were other strong supporters.

Thanks to Shahram Dabiri in the STEM Education office at Picatinny Arsenal, more than 400 New Jersey schools were informed about the project and many area schools stepped up to participate, including Lenape Valley, High Point, Kittatinny, Vernon, Green Hills Middle School, West Caldwell Tech, Sussex County Charter School, and the Clifton High School Mechanical Mustangs Robotics Team. Byram Township Intermediate School, under the guidance of Hofmann, also participated and a story was published on April 3 on www.njea.org about them.

But Hofmann didn’t just want to provide this vital PPE, he also knew first responders needed a boost, so every mask is engraved with the words, “Lovingly crafted by many thankful hands in Newton, NJ; USA; Stay safe!”

To date, 5,000 PPE have been produced and donated to hospitals, a feat that demonstrates without a shadow of a doubt that STEM and many, many other subjects that students study in school have vital real-world applications. 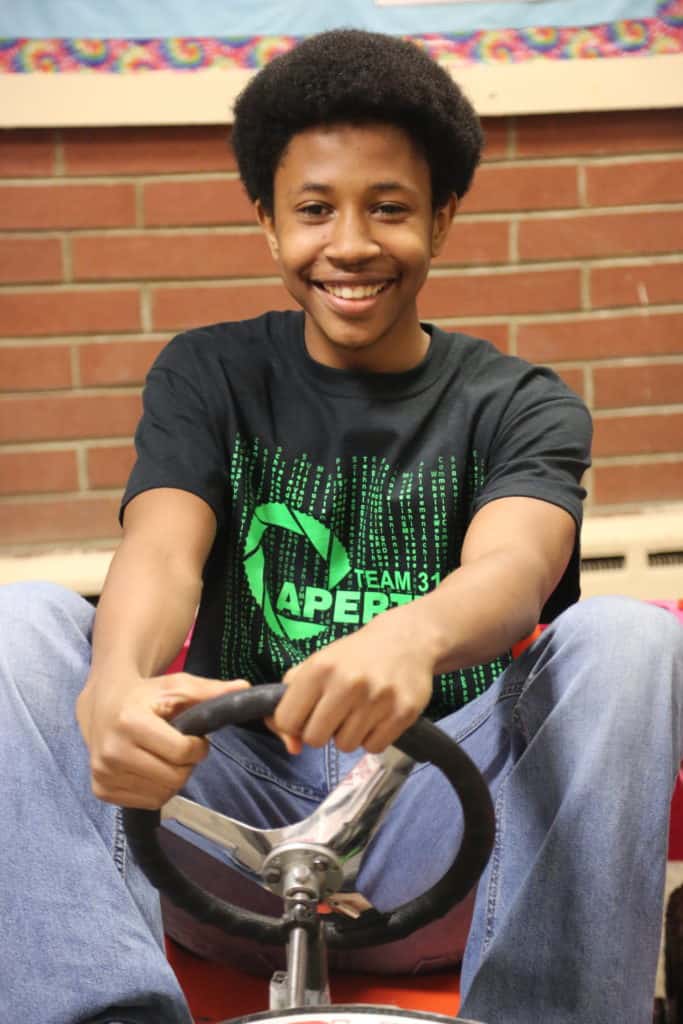 But Hofmann could not have moved as quickly or successfully to help with the PPE shortages if he hadn’t been working tirelessly for years to build the Newton robotics program and develop a strong network.

The Newton FIRST Varsity Robotics Team FRC#3142 Aperture began 11 years ago. FIRST, the acronym for “For Inspiration and Recognition of Science and Technology,” is an organization founded in 1989 by Dean Kamen that inspires children and teens to become involved in science and technology. It has programs and opportunities for students from kindergarten through 12th grade.

One of the highlights of the program is competing in Infinite Recharge. According to the FIRST website, “Under strict rules and limited time and resources, teams of high school students are challenged to build industrial-size robots to play a difficult field game in alliance with other teams, while also fundraising to meet their goals, designing a team ‘brand,’ and advancing respect and appreciation for STEM within the local community.”

The 2020 theme was Star Wars: Force for Change. Teams were tasked with launching balls at three different heights on the field.

“I run this program two nights a week, almost all year long,” Hofmann said. “Every Tuesday and Thursday nights, students, parents and mentors congregate here. The build is very intensive, usually between six and eight weeks long. During that time, we’re here every night of the week from 6 to 9 and on Saturdays from 10 to 2.”

Hofmann is quick to thank their sponsors and mentors for their contributions. “Picatinny Arsenal is our founding sponsor and their support has been life-changing. We’re also partially funded by Johnson & Johnson. Thorlabs is in our backyard, and they’re a high-tech partner and we get some of their mentors here helping us with the mill drill and their engineering expertise.”

Part of the Infinite Recharge competition includes outreach to sponsors and partners, and for Hofmann that is a vital part of the program’s success.

“The students help cultivate those sponsors,” Hofmann said. “We encourage them to reach out to their contacts: family, friends, etc. and we provide them with a lot of promotional materials to help them communicate what we are doing and how they can be a part of that.”

For Hofmann, not every student is going to excel at every facet of STEM, but every student plays an important role, and one that can benefit them in their professional lives.

“Everything that we do can be used in some way as a career skill,” Hofmann said. “We have subteams that are building websites, creating coloring books for younger STEM participants, mandating safety protocols, serving as spirit leaders, working on visual arts, writing and producing brochures, and much more.”

In addition to all this hard work, they’re having a lot of fun.

“The power racing series car is a fun, off-season thing,” Hofmann said. “We built our first car two years ago out of PVC pipe. Out of seven teams, we came out dead last. But this really isn’t a high school thing; it’s an adult thing. And adults cobble together these cars that are electric-powered, and they do their best to have some fun, and they get together and collaborate and build some really interesting vehicles.

“In our second year building the car, we ended up taking second place, in part because of ‘moxie points,’ which are awarded based on your positivity, your ability to get the crowd motivated and invested in your car.”

Hofmann credits the adult volunteers who work with the students as a major factor in the program’s success.

“We run this program from 6-9 p.m. so that these volunteers can participate and share their expertise with the students. We have whole families get involved. Building things is a great way to connect,” Hofmann said.

Hofmann also serves as a trustee for Sussex County Community College and Newton’s robotics program is a way for students to get a foundation in some of these engineering skills and potentially stay local for their continuing education.

“So many of our students have made it into well-regarded engineering programs around the country, and that tells me we’re doing the right thing,” Hofmann said. “My goal is for my students to be leaders in the push for new engineering innovations that makes the world better.”

Hofmann is also very active in encouraging more girls to participate in STEM. In January, Hofmann along with his sophomore STEM ambassador, Abigail Nicholas, helped organize an event at which more than 200 Sussex County freshman girls were encouraged to dream big as they participated in a Women in STEM Career Day. The event was hosted by the Newton FIRST Varsity Robotics Team and the Technology Student Association (TSA) female leaders. It was funded with a $5,000 grant from Johnson & Johnson. Thorlabs and Picatinny Arsenal shared some key engineering staff for this event.

“We are very fortunate to have a lot of support from the administration and the board of education,” Hofmann said. “We have a nice trophy case packed to the maximum thanks to their encouragement and financial support.” 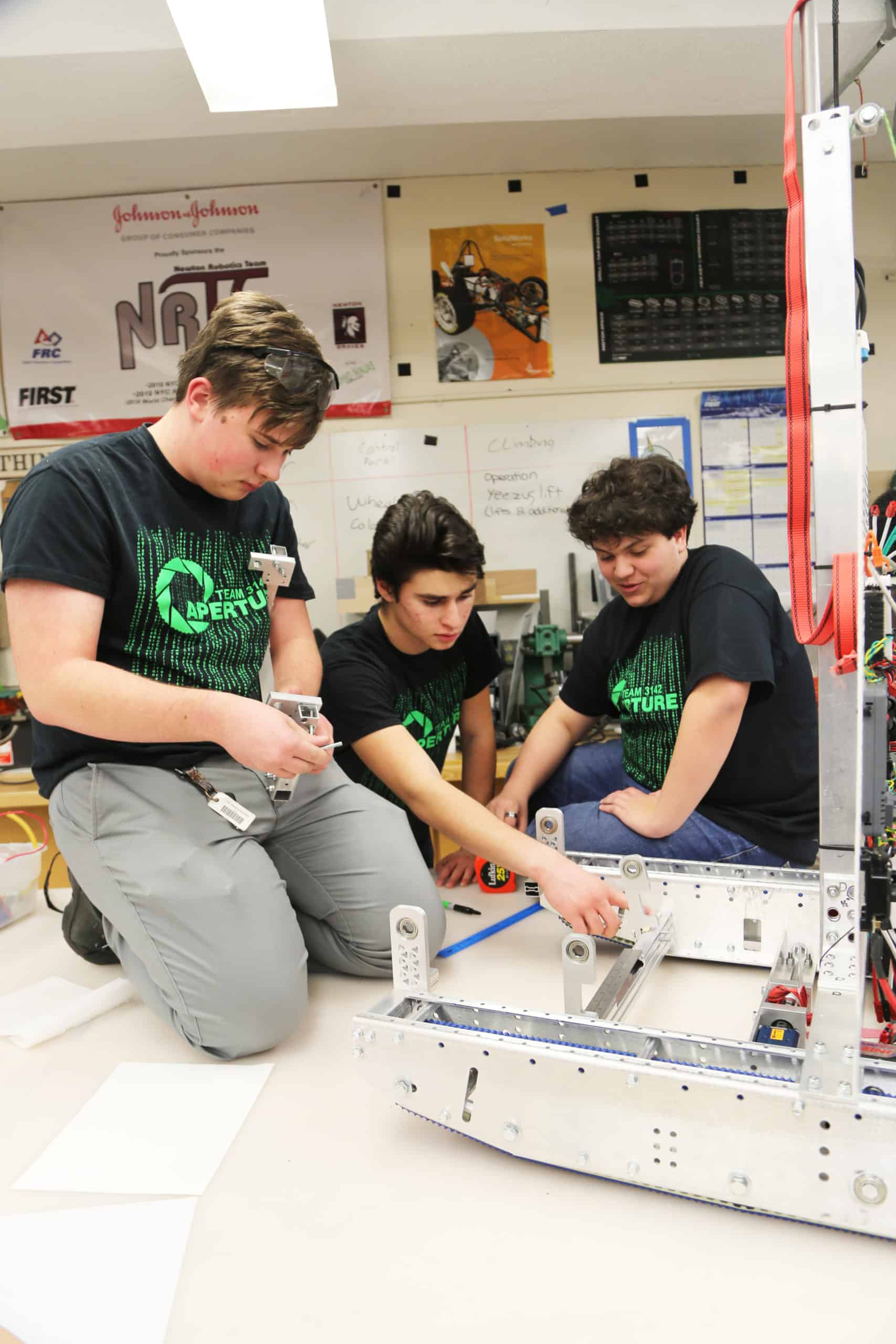 Hofmann is clearly passionate about robotics. He and his students have been working to garner support for legislation such as A-2455, a bill that would create a pilot program for FIRST robotics competitions in New Jersey.

Hofmann and his students met with legislators, sent letters, and worked with community partners to gain support for the bill, which Hofmann believes would have a powerful impact in increasing robotics programs in the state. Many other states already have similar programs. That hard work paid off on Sept. 1 when Gov. Phil Murphy signed the bill into law.

“I continue to believe in the power that these competitions have and the benefits they have for students,” Hofmann said. “I continue to work with all our partners to make sure this bill—and these kinds of opportunities for our students—get the attention it deserves. We have seen how valuable innovation and scientific discovery is; we need to keep building.”

A program that embraces change

For months, everyone has been wondering when things will get back to normal, but Hofmann and his students are providing an excellent example of the benefits of embracing the circumstances in which we find ourselves and applying all that we have learned—from networking to building to communications to programming and on and on—to face the challenges at hand. As educators, this is the moment when the answer to the question, “When am I ever going to use this?” is answered with: “Right now!”

Kathryn Coulibaly is the associate editor of the NJEA Review and provides content and support to www.njea.org. She can be reached at kcoulibaly@njea.org.

Honoring our veterans, upholding our values

NJEA can help save you money during your holiday shopping! 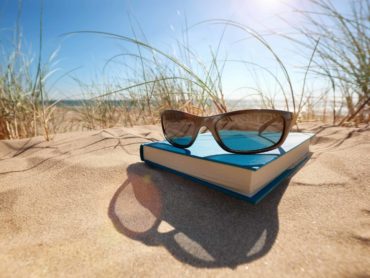