Florence Taliercio, an officer of the East Brunswick Education Association (EBEA), was formally recognized as the 2019 NJEA Educational Support Professional (ESP) of the Year at the ESP Conference on Feb. 2. Kathleen Howley, the previous president of the Camden County Council of Education Associations (CCCEA), received the 2019 NJEA Career Achievement Award. Susan Davis, a longtime advocate and leader for all members, including ESPs, earned the NJEA Friend of ESP Award. 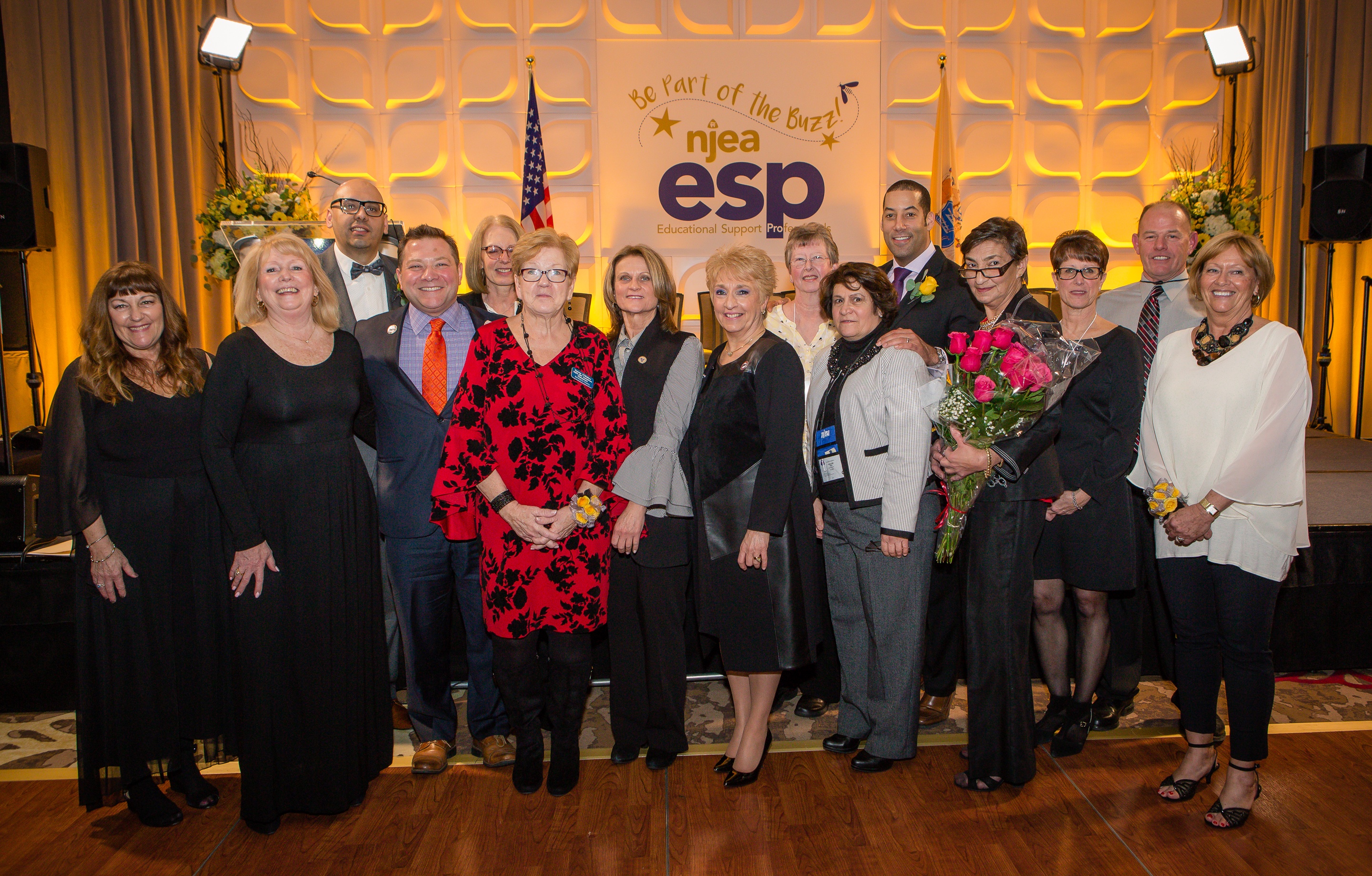 The story that traces Taliercio’s path to 2019 ESP of the Year was featured in the February NJEA Review.

A secretary in the Information Technology Department in East Brunswick Public Schools, Taliercio has enjoyed a long and varied career with the district. Over her years in the district, Taliercio served as a part-time lunch aide, later directly assisting teachers and the school nurse, and as a bus aide.

Her commitment to her profession is matched by her commitment to her colleagues. Taliercio has served on the EBEA Negotiations Team since 2015. She has been chief building representative since 2006. She currently serves as a member of the ESP Council, ESP Evaluation System Committee, Contract Writing Committee, Pension Action Committee, Public Relations Committee and on the EBEA Alliance. In addition, she is a PRIDE Committee captain and a Together for Success captain.

At the county level, Taliercio has been a delegate to the Middlesex County Education Association (MCEA) and has served on the MCEA Collective Bargaining Council since 2015.

“Working in the educational arena is at the same time challenging and rewarding,” Taliercio said upon accepting the award. “I see the difference our educational support professionals make in so many student’s lives, and I see the assistance they provide to our educators daily. It is most certainly my honor to work with them.”

“Florence understands the power of her voice,” NJEA President Marie Blistan said as she presented Taliercio with the ESP of the Year Award. “She knows that her voice can and does make a difference. She uses her voice, along with her commitment to service, to elevate the voices of others.” 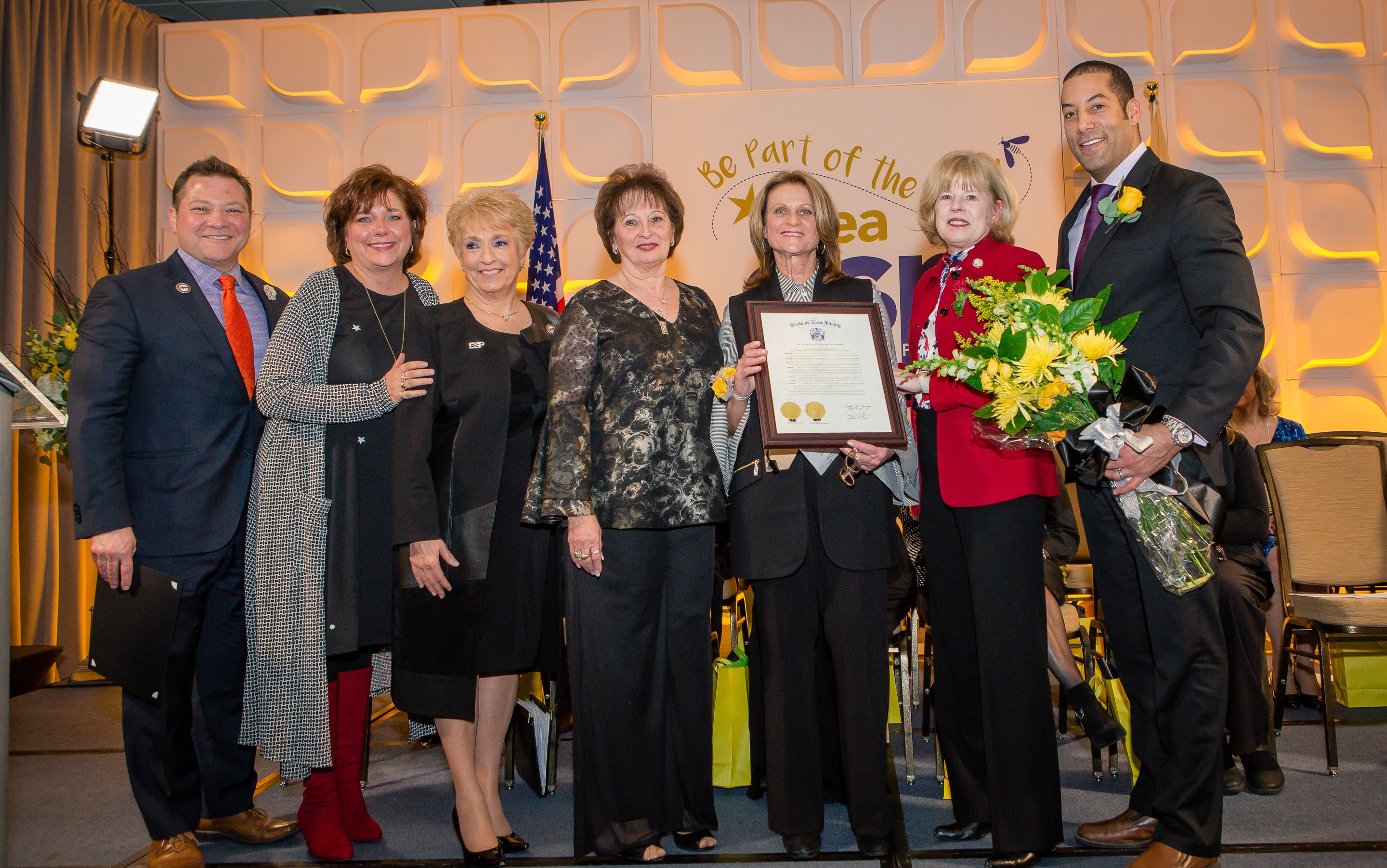 Kathleen Howley, serves as a secretary in the business department at the Camden County Vocational Schools, and has been a member of the Camden Vocational Education Association for 25 years.

Howley became involved in her local association, taking on roles as a building representative and as a member of the negotiations team. Later she became second, and then first, vice president. In the CCEA, she held multiple leadership offices before becoming county president for over six years. At the state level she served on numerous committees as well as the NJEA Delegate Assembly, the association’s policy-making body.

“Kathie is the very embodiment of the word ‘community,’ whether we are talking about her role in her association or at the county and state levels,” NJEA Vice President Sean M. Spiller said as he presented the Career Achievement Award to Howley. “She instills a sense of fellowship in her members and the students she serves.”

Howley credited her career as an advocate in NJEA to her mentors Earl Kights and Sharon Long, who were longstanding leaders in CCCEA, NJEA and their local associations.

“Earl taught me, and all ESPs, that we have an equal voice in this association and that there is nothing wrong with letting it be heard,” Howley said. “Sharon walked me through how to be a good leader by her example, and she continued to support me as I became the first NJEA ESP to hold the position of a county president.”

Howley used her remarks as an opportunity to pay forward what Kights and Long did for her.

“I would like all ESPs to remember that you are equal in this association, don’t be intimidated, and make your voice heard,” Howley said. 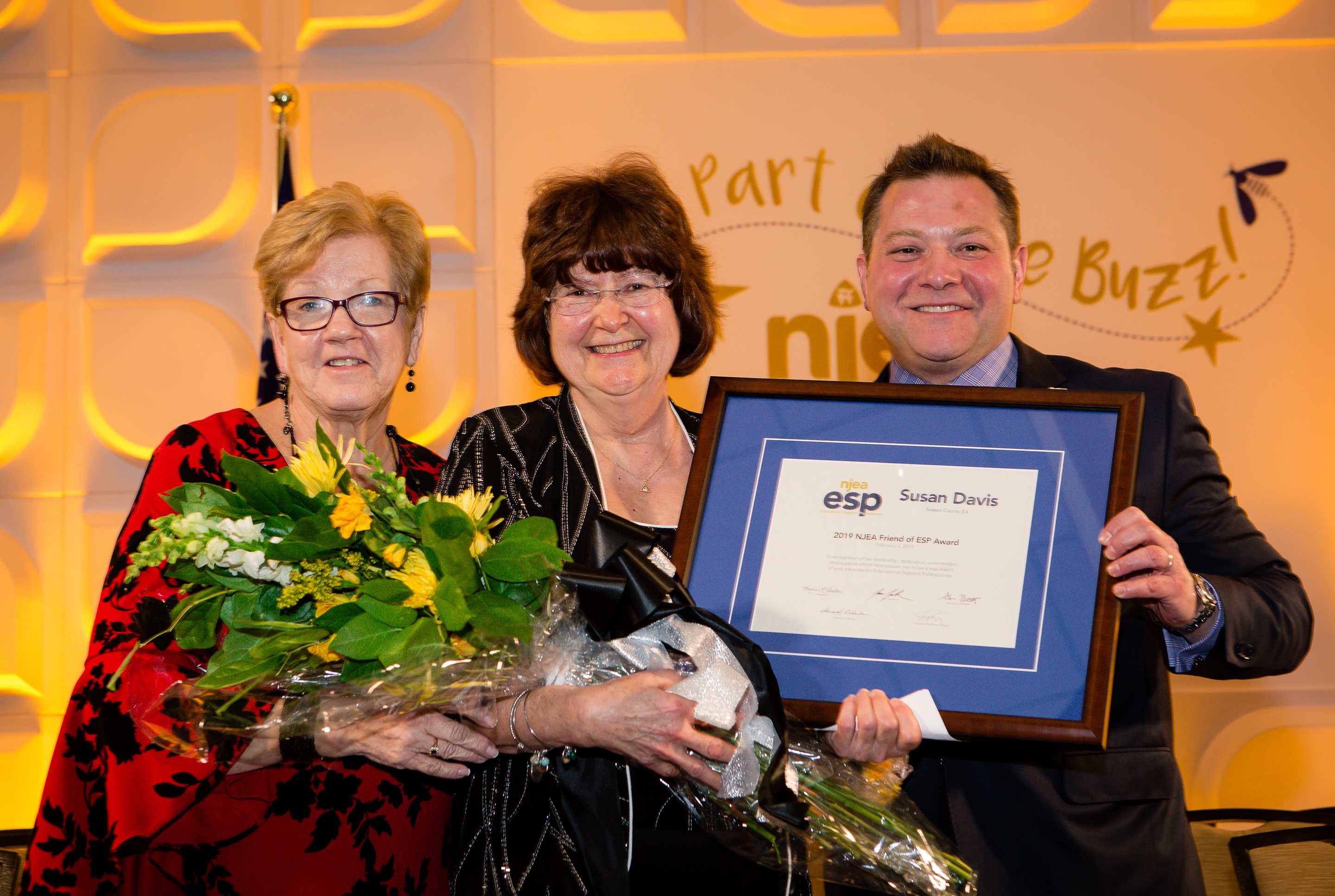 Susan Davis, a longtime leader and stalwart advocate for all NJEA members, was honored with the Friend of ESP Award. The award is presented annually to a person or organization whose leadership, acts, dedication, commitment and support on the statewide level have proven that person or organization to be a true friend of and advocate for ESP and their contributions to public education and students.

As the chair of the NJEA Convention Committee, Davis bristles when she hears the term “teacher’s convention” used to describe the annual event. In fact, under her leadership convention offerings for ESP have expanded as has the presence of ESP resources on the Exhibit Hall floor.

“With her positive, can-do attitude, Sue encourages ESP members to take risks and become union leaders, going the extra mile by offering any assistance and training they may need to succeed within the association,” NJEA Secretary-Treasurer Steve Beatty said as he presented the Friend of ESP award to Davis. “Regardless of whether she was operating in her role as Sussex County Education Association president, NEA-RA delegate, Delegate Assembly representative, NEA Director or Executive Committee member, Sue was constantly working to get ESP members involved in their local, county, state and national levels of our union.”

In accepting the award, Davis spoke of the value of honoring past leaders and inspiring new ones.

“I certainly do not stand here because I accomplished change and impact all by myself,” Davis said. “It happened because of the people who came before me. In fact, there are many people who have lifted me to more than I believed I could be. And that’s what I feel is my role and my purpose now: to pay it forward and to ensure that someone else feels inspired enough to accomplish change and impact.” 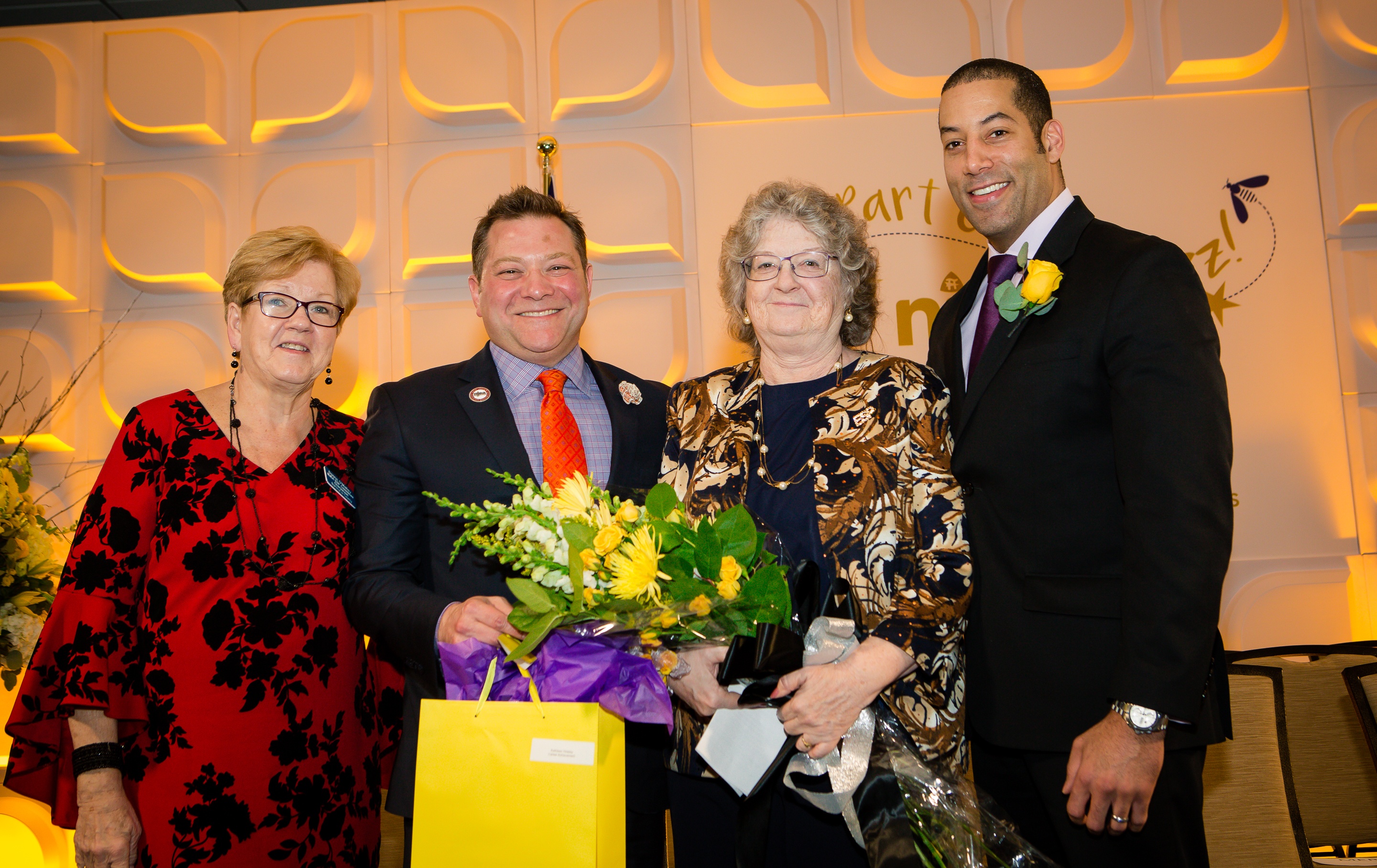 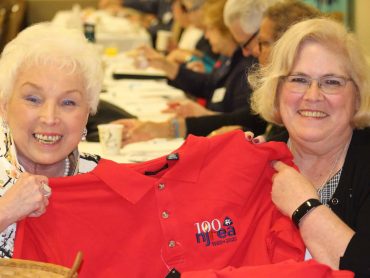 On April 23, NJREA will host its annual Spring Luncheon. Throughout this popular, member-exclusive event,... 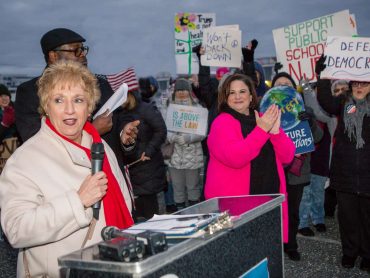 Blistan speaks up for students ahead of Trump rally 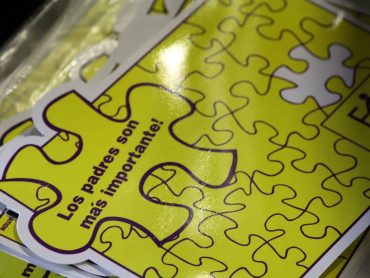 An NJEA-sponsored program is reaching out to parents throughout New Jersey. A FAST initiative, the parent...