On a moment’s notice, dozens of NJEA members arrived in Trenton today to tell Gov. Chris Christie and Senate President Steve Sweeney to stop the shutdown of the state. Christie and Sweeney have forced the closure of nonessential state services—including state parks and state beaches—in an attempt to force a vote on an unrelated bill that would ultimately raise health insurance premiums for millions of New Jersey residents and threaten to destabilize New Jersey’s health insurance market.

Meanwhile, Christie and Sweeney attempted to cast blame for the closure on Assembly Speaker Vincent Prieto despite the fact that Prieto has twice since Thursday posted the state budget for a floor vote. Sweeney, however, has refused to post the budget in the state Senate in an attempt to force Prieto to give in to the governor’s demand to drain Horizon’s reserves.

While Prieto has posted the budget bill twice, it has not yet garnered enough votes for passage because 22 Assembly Democrats beholden to Christie and Sweeney have abstained.

“This is Day One of the Christie budget hostage crisis,” Prieto said in a press conference in the Statehouse Annex today. “I don’t have executive authority to shut down government.” 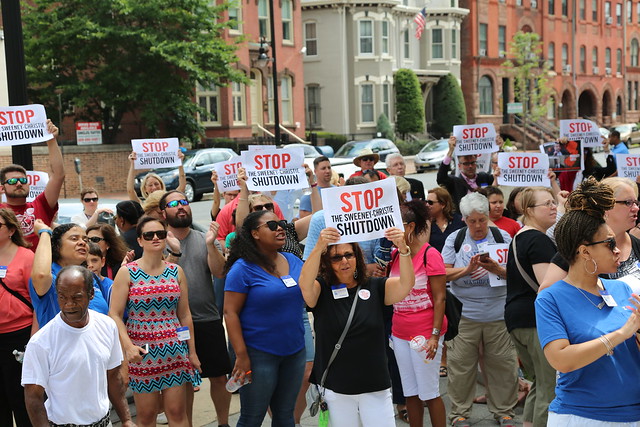 Prieto noted that over 40 percent of New Jersey residents receive health insurance through Horizon and would potentially face an increase in insurance premiums.

To support Prieto and to expose the Christie-Sweeney scam, teachers, educational support professionals, state workers and New Jersey residents affected by the state shutdown protested outside of the governor’s office in Trenton where the governor held his own press conference. Members were appalled that the governor had posted signs on public property attacking Speaker Prieto while refusing members’ rights to post their own signs refuting the governor’s lies on the same public property.

NJEA and NJREA members are keeping watch at the Statehouse today and throughout the Christie-Sweeney shutdown until the budget crisis created by the governor and Senate president is resolved.