NJEA’s attorneys are carefully reviewing the decision and will be appealing this decision.

Pepe involved a challenge to the State’s practice of requiring school employees, who had retired with more than 25 years of service credit after June 28, 2015, but had less than 20 years of service as of June 28, 2011 (the enactment date of P.L. 2011, Chapter 78), to pay a portion of their health benefit premiums in retirement.

Before June 28, 2011, school employees retiring with 25 or more years of eligible service had been furnished with post-retirement health benefits premium free.

By way of background, in 2011, the Legislature passed Chapter 78, a complex piece of legislation which radically changed the terms and conditions under which both active and retired employees would pay for, and receive, pension and health care benefits.

In NJEA’s view, Chapter 78 imposed a 4-year temporary obligation period from June 2011 to June 2015, wherein retirees that had less than 20 years of service credit as of June 28, 2011 and retired with 25 or more years of eligible service credit, would be subject to premium sharing in retirement.

NJEA argued that members who retired after June 2015 with 25 or more years of eligible service credit, whether or not they had 20 or more years of service as of June 28, 2011, would not have to premium share based on the sunset of this temporary provision after 4 years.

When the 4-year temporary obligation was supposed to sunset in June 2015, the NJ Division of Pensions and Benefits continued to charge retirees who retired after June 2015.

Because of this decision by the State, NJEA, on behalf of three retirees, who retired after the 4-year temporary obligation, Linda Pepe, Kim Reilly, and Terry Delbow (all of whom had at least 25 years of eligible service at that time, but had less than 20 years of service as of June 28, 2011), filed a lawsuit challenging the State’s imposition of health care premium sharing on the retirees.

NJEA filed a lawsuit in the trial court; Judge Jacobson was assigned to the case and considered the positions of NJEA and the State.

She acknowledged that despite the complexity of Chapter 78, the plain language of the law about sun setting seemed to favor NJEA’s argument, and that to reject it would amount to a “strained interpretation” of the section of the law.

However, she determined that it is not always appropriate to read a statute literally, but that a court must instead be guided by legislative intent and spirit as revealed in the statute as a whole, and in legislative history, and not in isolation.

Consistent with that principle, the Court relied on Senator Sweeney’s personal advocacy for the adoption of Chapter 78, and the Legislature’s concurrence with his view that “broad reform” in the form of premium sharing and reducing benefits was “necessary” for fiscal stability.

The overall intention of the statute, in the Court’s view, was holistic reform that was not limited to a temporary obligation period for those who retired between June 2011 and June 2015, but which went beyond that.

The Court also made reference to the “uniformity” that the Legislature purportedly strives for in health benefits.

While true that there is a general trend of aligning the rights and benefits of unionized employees, in terms of health care there is very little uniformity, given that in 2007, SEHBP broke off from the SHBP to divest itself of the same uniformity clause.

NJEA is working with our attorneys to prepare an appeal of this decision.

Join the Death of a Pension Amendment Rally

NJEA statement on horror in Charlottesville 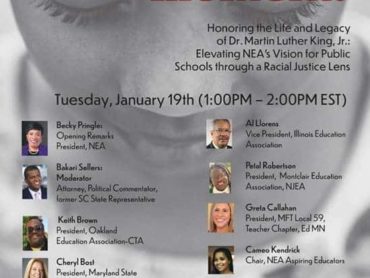