The New Jersey Senate and Assembly passed a package of bills designed to make our schools and communities safer, which Gov. Phil Murphy signed into law today, July 16, 2019.

The new laws address a number of commonsense gun-safety proposals, including establishing a commission to approve personalized handguns and criminalizing the purchase, transfer, or possession of certain weapons and ammunition by persons convicted of certain crimes. These laws help promote New Jersey’s reputation as a state that takes a commonsense approach to countering gun violence.

NJEA recognizes that the proliferation of guns pose a great safety risk to students and staff in public schools. They also endanger our students and their families outside of school. NJEA supports these measures to reduce the risk posed by guns. 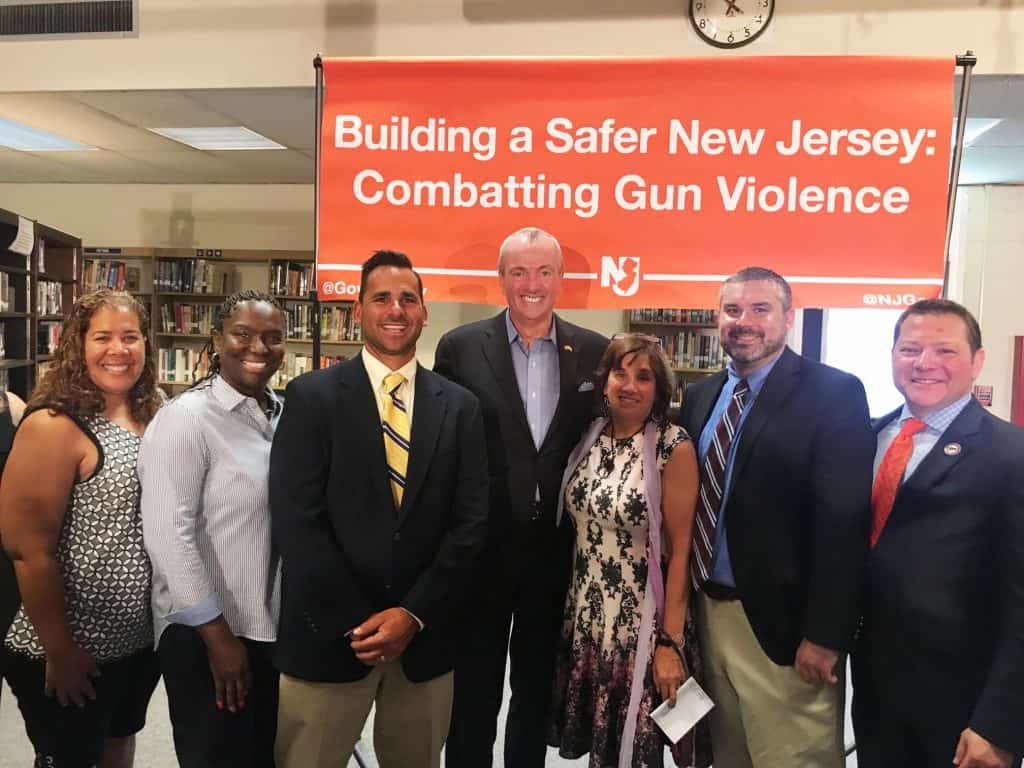 NJEA Secretary-Treasurer Steve Beatty (Above, far right) was at the signing ceremony.  Beatty applauded the new laws. “NJEA members, along with their colleagues who work in schools across America, strive every day to create safe, healthy school environments where our students can learn and grow without fear,” said Beatty. “As educators, we care about so much more than our students’ academic success.  We care about their health and safety. Our nation, though, has allowed guns to threaten nearly every safe haven, including our schools. We appreciate the efforts of our governor and legislature for moving New Jersey in the right direction.”

NJEA President Marie Blistan praised Murphy and legislators for their work to make schools safer. “Schools should be safe havens for learning and development,” said Blistan. “They should not become armed fortresses of fear. The only way to make our schools safer is to make our nation as a whole safer. That requires a willingness to change our approach to guns so that they are harder to obtain, easier to track and less likely to get into the hands of those who will use them to murder other people. I’m proud that our state is leading the way on common-sense gun safety reform.”

“For years, the gun lobby has argued that the solution to gun violence is to have more guns,” said NJEA Vice President Sean M. Spiller. “We know that more laws alone won’t solve a problem that is deep in our nation’s soul. But we must start somewhere, so we are glad that New Jersey has begun to take action to curb gun violence. It is time to put the safety of our children and school staff ahead of the profits of gun manufacturers.”

Statistics show that suicide is the number one cause of gun deaths in the U.S., but that the gun homicide rate in the U.S. is 25 times higher than that of similar high-income countries. There is an average of 13,000 gun homicides in the nation every year. Twenty-one children and teens are killed with guns in the U.S. on an average day, and 43 women are killed by a spouse or dating partner in an average month. In addition to the 100 Americans shot and killed on a typical day, 210 are shot and survive.

Every mass shooting is a tragic reminder that our nation still refuses to acknowledge and address the scourge of gun violence. Our schools should be safe havens for learning. Parents should never have to fear for the safety of their children while they are at school. Students should never have to wonder if they will fall victim to gun violence at school.