The history of pension funding in New Jersey has been a tumultuous one.  The state’s longstanding failure to make its statutorily required pension payment year after year has created a deep hole that Gov. Phil Murphy and the Legislature are trying to dig out of. NJEA has fought the state’s failure to fund the pension system in the courts. While the courts have acknowledged the right of members to receive the pension that they earn while working, they have held that the they cannot force the state’s hand to make the necessary payments.

The pension funds are funded partly by employee contributions, and partly by the state or the local employer.  Certificated public school employees are part of one of the state funded systems—the Teachers’ Pension and Annuity Fund (TPAF). Non-certificated public school employees are part of the Local Public Employees’ Retirement System (Local PERS), which is funded by the local employer.

Every year the actuaries for each pension system publish a report called an Actuarial Valuation Report. This report provides a snapshot of the health of a pension system by measuring the assets and liabilities.  As of the 2019 valuation, the TPAF was funded at 40.3%. The funded value represents the ratio of assets the plan currently has to the projected benefit payments that members have earned. In other words, the plan has enough assets to pay 40.3% of the benefits owed to active and retired members of the fund. This does not mean that members will only receive 40.3% of their benefit—it just means that at that point in time, the assets could not fully cover the liabilities.

As of the last valuation, Local PERS was funded at 67.4%—significantly higher than TPAF. This is because local employers are paying into the plan, rather than the state, and they have more consistently made the full payment. However, in the near future neither PERS nor TPAF are projected to reach a funded level of 80%, which is the threshold for which the potential reinstatement of the cost of living adjustment (COLA) can be contemplated.

During the Christie administration, P.L. 2011, Ch. 78 was passed. The law made a modification to the pension benefit affecting the retirement age and formula used to calculate the pension benefit for employees hired after June 28, 2011, and included a guarantee that the state would begin increasing their payments over a seven-year period, at which point the full payment would be made. For three years, the state adhered to the payment schedule as outlined in Ch. 78. However, the Christie administration failed to include the four-sevenths pension payment in the 2015 state budget. NJEA immediately filed a lawsuit along with other public-employee unions. The New Jersey Supreme Court ultimately ruled in favor of the state, on the basis that the state’s pension payments per Ch. 78 violated the debt limitation clause of the New Jersey Constitution.

Toward the end of the Christie administration, the state implemented quarterly pension payments, which helps the system because it gets the money to the Division of Investment faster so that it can be invested. The state lottery was also redirected to three of the state’s pension systems, with the bulk going to the TPAF, and a smaller percentage allocated to PERS. Lottery revenues are received on a monthly basis, which also improves the cash flow for the Division of Investment.

Even with the increased funding since 2011, the funded status of the state funded pension systems, including TPAF, has continued to decrease. This is in part because when the state fails to contribute 100% of the actuarially required contribution, liabilities increase. The funded status of the TPAF decreased from 53.2% in 2010 to 40.3% in the 2019 valuation. Liabilities increased by over 35% between 2010 and 2019.

For each year that the state makes a 100% ARC payment to the pension system, the funded status will improve slightly, so long as the investment returns are also on track. But it will take decades for the state to dig out of the pension hole that resulted from decades of underfunding. For the fund to become healthier, and to get to the point where the COLA can be reinstated, the state will have to continue making that full ARC payment for quite some time.

Record pension payments have been made over the past few years under the Murphy administration—an important first step to putting the pension system
on track.

Since school districts fund Local PERS differently, the funded status of Local PERS has increased from 61.6% in 2010 to 67.4% in 2019. Even with the considerably higher funded status, liabilities have grown by nearly 48.5% between 2010 and 2019. The payment made to the pension system for Local PERS employers also includes payment for previous underfunding of that system. Even with its comparatively higher funded level, Local PERS faces issues with the impact of privatization of support staff positions in school districts. Every time PERS positions are outsourced, the local employer is no longer paying into the pension, even though outsourced employees may qualify for a pension for the years previously worked.

The impact of COVID-19

Until the current financial crisis caused by COVID-19, pension fund investments were doing well, averaging 7% over the past 10 years. As expected, the most recent pension fund report shows negative returns for the 2020 calendar year. However, keep in mind that since pension fund reports lag a few months behind markets have recovered quite a bit from the low point.

In addition to the losses in the market, the state of New Jersey is expecting a significant budget shortfall for the upcoming fiscal year. The state made full quarterly pension payment in June, which was the final payment for the 2020 fiscal year. The state treasurer’s office has communicated that it is hoping to make the FY 2021 payment, but the payment will be behind.  The first payment, which is due in September, is expected to be paid in October.

In summary, the good news is that the state has been significantly increasing the payment being made to the pension system. Record pension payments have been made over the past few years under the Murphy administration—an important first step to putting the pension system on track. However, the hole we are digging out of is quite deep and has further been exacerbated by the current financial and state budget crisis.

NJEA and NJREA will continue to fight for full funding of the pension systems. 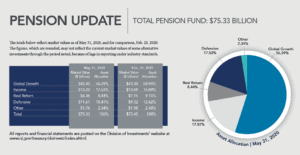 All reports and financial statements are posted on the Division of Investments’ website at www.nj.gov/treasury/doinvest/index.shtml.

Sarah Favinger is an associate director in the NJEA Research and Economic Services Division. She can be reached at sfavinger@njea.org.