April 1, 2020, Census Day, has come and gone. Census invitations and first reminders have gone out. The online survey site and call-in centers have been active for months, and by all estimates, this year’s household participation rate, even prior to the outbreak of COVID-19 in mid-March, may be lower than at this point in the 2010 census. Areas of New Jersey where 2010 census participation was particularly low, are at greatest risk of being missed and, therefore, the most significant risk for harm.

The stakes are high. The size of New Jersey’s congressional delegation in Washington, D.C., and federal funding for our schools, for Medicare, Medicaid, and the Supplemental Nutrition Assistance Program (SNAP) are all determined by the census. Population statistics use census data to determine rates of disease, poverty, employment and crime. Accuracy depends on a complete census count.

Now is the time to get out the count

Respond to the census, if you haven’t done so already. Ask everyone you know to do the same. Consider including census-related topics in your lesson plans, and/or check in with your local Complete Count Committee to help ensure everyone in your community is counted.

If you have ties to a hard-to-count population, please consider getting involved. Your community’s trust in you can make all the difference in someone’s decision to participate.

According to ACNJ Fact Sheets:

•   190,008 Asian people live in hard-to-count areas of New Jersey. That comprises 21% of the total Asian population in the state.

•   668,636 Black or African American people live in hard-to-count areas of New Jersey. That comprises 51% of the total Black population in the state.

•   696,085 Hispanic or Latinx people live in hard-to-count areas of New Jersey. That comprises 40% of the total Hispanic population in the state.

The U.S. Census Bureau considers populations hard to count if they are:

•   Hard to locate – Populations can be both hard to sample and hard to identify by some characteristic of interest (e.g., nomadic peoples and those hard to identify because of stigma and motivated misreporting, sometimes for reasons of personal safety).

•   Hard to contact – Once located, populations can be difficult to physically access (e.g., gated communities or populations experiencing homelessness).

•   Hard to persuade – Once accessed, populations may be reluctant to participate in enumeration (e.g., political dissidents or those who feel that they are too busy to participate).

•   Hard to interview – Once engaged, enumeration itself may be hindered by some barrier (e.g., lack of a shared language, low literacy or some form of disability). 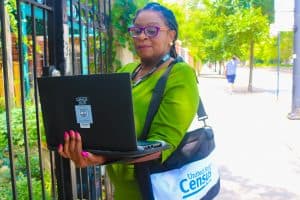 A census worker engaged in address canvassing to improve and refine
the U.S. Census Bureau’s address list in advance of the 2020 Census.
Photo from census.gov/library/photos.html.

Advocates for Children of New Jersey (ACNJ) has identified five demographic groups in need of targeted census outreach: Asian, Latinx, Black/African American, children under age 5, and households with limited or no internet access. ACNJ has compiled detailed fact sheets and mapping tools, which can be found on the Complete Count page of the Fund for New Jersey’s website.

April 1: Census Day is observed nationwide. By this date, every home should have received an invitation to participate in the 2020 Census.

May 28 – August 14: Census takers will interview households in person that have not responded online, by phone or by mail. Dates adjusted two weeks forward due to COVID-19.

December: The Census Bureau will deliver apportionment counts to the president and Congress. 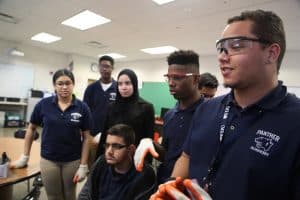 Student Run Makerspace – With little space and no budget, students from PANTHER Academy in Paterson designed and build their own Makerspace. Students tinker in the Makerspace before schools, during lunch and afterschool, sometimes into the evening. The students design the space, the furniture and the tools they use to “make” stuff. They collaborate with school staff and the community to obtain the resources they need to become makers.

Response Outreach Area Mapper (ROAM)
This Census Bureau tool was developed to make it easier to identify hard-to-survey areas and to provide a socioeconomic and demographic characteristic profile of these areas using American Community Survey.

2020 Census Response Rate
Check out this map tool to see how your community is doing in real-time. 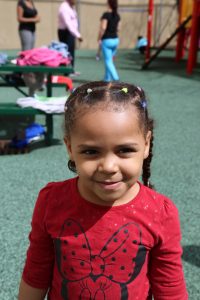 Children under five years of age are among the population of residents considered hard to count.

Complete Count NJ Resources page
This page has a list of “Get Out the Count Hubs,” with links to organizations doing targeted outreach, including, but not limited to:

Facts that affect a full count

Do you have a college student or young adult sheltering-in-place with you?

The U.S. Census Bureau says you should NOT include them as members of your household even if they were residing with you on April 1, 2020. College student and others should respond and count themselves where they “live and sleep most of the time.” For more information, see 2020census.gov/en/who-to-count.html.

To work in a school is to make magic

We grieve, and go on, together 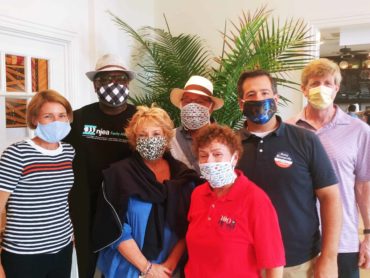