In 2016, the union representatives on the design committees brought forward a proposal to dramatically change how the state bids for employees’ prescription drug benefits. While the state initially resisted the proposed change, the union representatives finally won state cooperation by demonstrating that New Jersey had the opportunity to save double digit percentages on its prescription costs without any changes to the benefits it offers employees. The change consists of using an online auction to make prescription drug benefit providers bid against each other in a transparent and much more competitive bidding process.

Legislation enabling such a bidding process was passed earlier this year, and the final results are in.  OptumRx, Inc. won the bid for a three year period beginning Jan. 1, 2018 with a price that is more than 10 percent below what the state was projected to spend under the current prescription vendor. The state, local employers and public employees together will save at least $1.6 billion during the three-year OptumRx contract.

Until recently, large employers like the state of New Jersey took bids for pharmaceutical drug plans without knowing the real costs of individual prescriptions. Each provider submitted a different proposal with its own complicated and opaque pricing scheme, and the state was unable to properly compare the true cost of those proposals.  This time, with the help of technology provided by Truveris, a company that specializes in such bidding, the state was able to issue a common contract, receive bids, and compare the real costs of each bid.

NJEA President Wendell Steinhauer, chair of the SEHBP Plan Design Committee, hailed the savings. “Without the technology-enabled auction, that $1.6 billion in savings would have shown up as simply extra profits for private companies at the expense of our members and all other New Jersey taxpayers.  New Jersey has achieved huge savings by deploying technology to create a real market for pharmacy drug plans. We are proud to have taken the lead on this breakthrough approach and helped our members and other taxpayers alike.”

Patrick Nowlan, AFT representative and co-chair of the SHBP Plan Design Committee affirms this by stating, “The success of this process is a testament to the unions’ efforts on the Plan Design Committees to implement practical and innovative reforms within the state’s infrastructure. These efforts ultimately will save resources for the state and members without diminishing benefits for our members and their families.”

NJEA Director of Research and Economic Services Kevin Kelleher is also a member of the SEHBP Plan Design Committee and was a driving force behind pushing the state toward this smarter, more competitive bidding process. He was very pleased with the huge savings achieved. “By using technology to compare the drug pricing of each vendor at a very granular level, we were able to make an apples-to-apples comparison and become an informed purchaser.  In the past, the state did not use such technology. As a result, New Jersey was easy prey for predatory pricing of prescription drugs,” Kelleher explained.

“The technology has created a competitive market for prescription medicines that didn’t exist before in New Jersey,” said Jean Pierce, Policy Staff, Health Professionals & Allied Employees, representing AFT on the SEHBP Plan Design Committee. “Taxpayers, public employees and their families are benefiting with savings amounting to hundreds of millions of dollars each year.”

“The savings did not come easy” said Hetty Rosenstein, New Jersey director of the Communication Workers of America, the largest union representing state workers. “The state was initially resistant to changing its long-standing bidding practices.  It took over a year for the union representatives to the SEHBP and SHBP design committees to convince their state-appointee counterparts to look into this progressive but common-sense way of achieving vast savings.”

At a time when prescription costs continue to outpace inflation, it is important that New Jersey does everything possible to control rising costs without degrading the quality of the benefits it offers to employees.  The union representatives of the SEHBP/SHBP are proud of what they accomplished in this process and look forward to identifying and implementing more win-win approaches to cost control in the future. 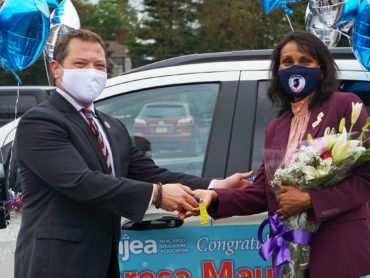