It’s 7:10 a.m. and Brian Ward, automotive technical instructor, is on cafeteria duty. He greets students and colleagues alike with a joke and a smile as he watches over the packed lunchroom of the school he loves.

Ward holds a unique position at the school. In 1990, he graduated from the diesel program at Sussex County Technical School, known to all as ‘Tech.’ In 2005, he came back to the school as an instructor, and a few years later, became president of the Sussex County Vocational Technical Education Association (SCVTEA). But his story almost ended very differently—and he credits his teachers at Tech with changing the course of his life.

“In 1986, my father had just passed away and my mother’s car constantly needed repairs and she was getting raked over the coals,” Ward recalled. “I had no real ambition to be a mechanic, but I thought that if I didn’t learn this trade, we were going to be much poorer than we already were. 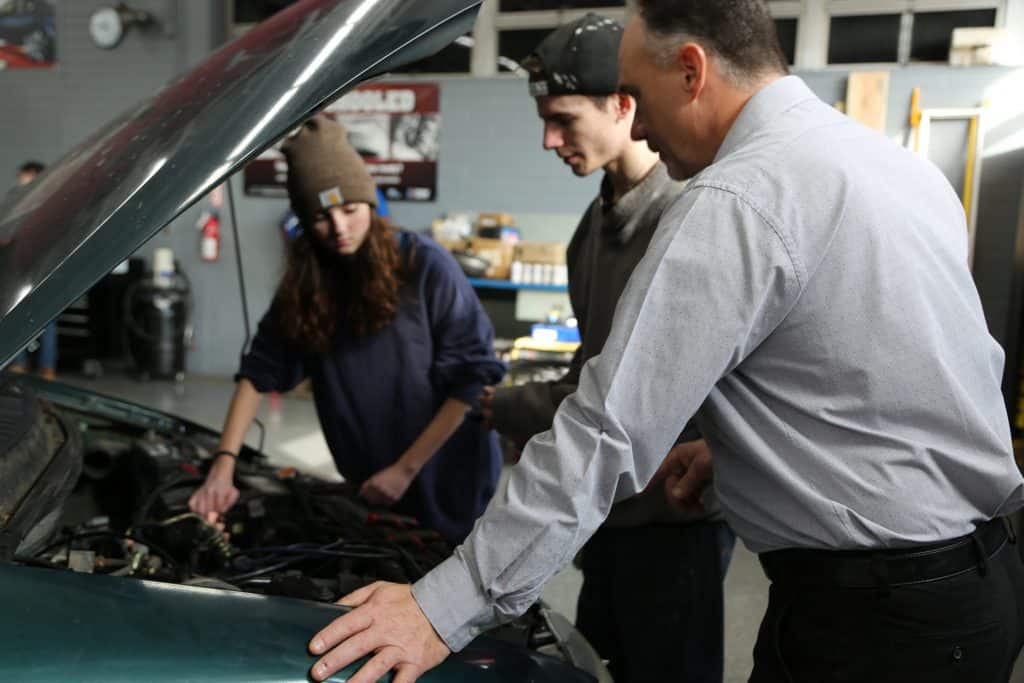 Sussex Tech’s automotive program is among the best in the state. Upon graduation, students who complete the program earn Automotive Service Excellence (ASE) certification in automotive and diesel. No other technical school in New Jersey offers that distinction.

“I joined the diesel program at Tech. That was a very tough period of time for me, but my teachers—Mr. Meyers, the shop teacher; Mrs. Buenning, the math teacher; and Mr. Dixon, the welding teacher—took me under their wing.”

Within a few years, Ward was attending high school from 7 a.m. to 3 p.m. and night school from 6 p.m. to 10 p.m. He wanted to quit school so he could get a job to help provide for his family. He convinced his mother to sign the papers that would allow him to leave school.

But his teachers had other plans for him. The very day he attempted to quit school, Mr. Meyers, Mrs. Bueney and Mr. Dixon pulled up in front of his house in a white Lincoln.

“They sat at the kitchen table with my mother and me and convinced us that they would find a way to make it all work,” Ward said. “They took me back to school and persuaded the administration to make me the first student teaching assistant in the school’s history. I owe everything to them.”

After graduation, those three teachers helped pay for him to attend Ohio Technical School. When he finished his studies there, he went to work at a car dealership, working his way up the ladder to greater responsibilities.

“Everything that I learned here at Sussex Tech, value-wise, made me successful in the dealership,” Ward said.

In 1997, he opened his own business. Once he was established, he invited his high school teachers out to dinner and asked them how he could ever repay them for what they had done for him. They agreed that he could repay his “debt” by coming back to Tech as a teacher if he got the chance.

“A couple of years later, the auto tech instructor called me at my shop and said, ‘I’m retiring. I want you to come in and apply for my job,’” Ward recalled.

Everything that I learned here at Sussex Tech, value-wise, made me successful in the dealership.

“I always stayed in touch with my teachers,” Ward added. “Once I started teaching, I relied heavily on their advice and expertise. If I didn’t have them as mentors, I’m not sure I would have survived as a teacher. Those first three or four years are really tough.” 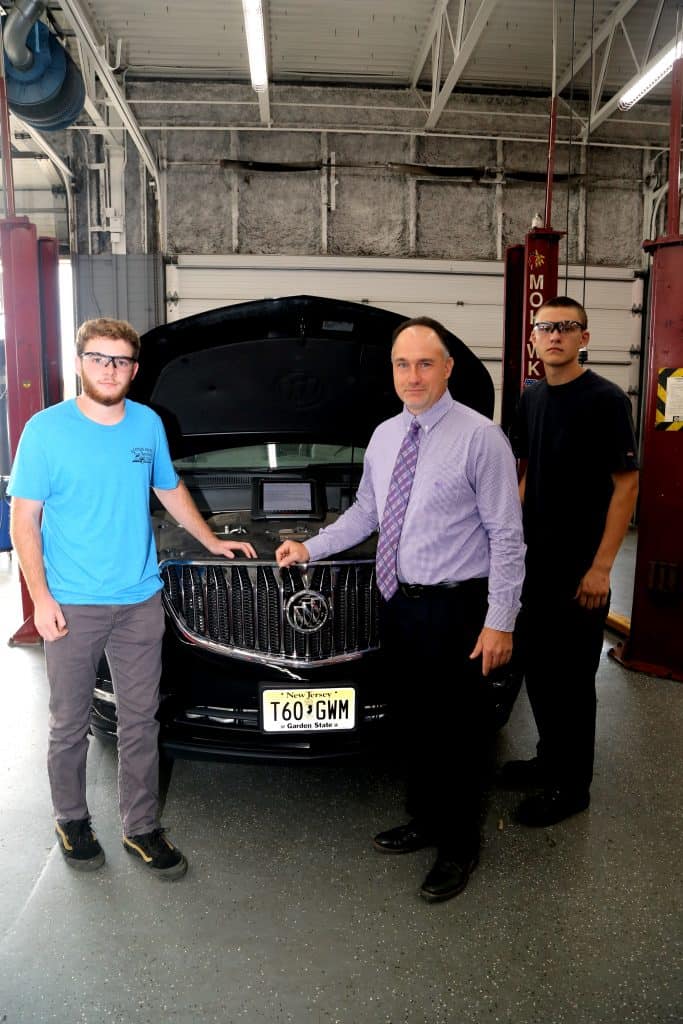 Ward has not only survived as a teacher, he has excelled. He is certified in automotive and diesel education, and he is very proud of the program that he and his colleagues have built. The students rotate every two marking periods. In order to participate and comply with all of the program’s and state’s requirements, students have to forgo an official lunch period in favor of additional instructional time. But that sacrifice pays off. When they graduate, they are Automotive Service Excellence (ASE) certified in automotive and diesel. No other technical school in New Jersey offers that.

Following lunch duty, Ward enters his classroom and monitors the students as they go through the morning routine. They enter a locker room off the automotive shop and change into overalls. The students sit in a tiny classroom to listen to announcements and so Ward can give them the charge for the day, and then they file out into the shop for hands-on work experience.

Ward occasionally interrupts to instruct or correct, but for the most part, students are confidently performing their tasks.

“We value and emphasize that you have four years here and then you’re out in the workforce,” Ward says. “No one is going to teach you how to work. The majority of our teachers here are focused on ensuring that students know how to be successful in the workforce when they walk out these doors for the last time.”

“I spend more time with these kids than their parents do,” Ward notes. “You have to be a guidance counselor and a father figure. If you can’t do that part of it, you’re not going to be successful in the shop because that’s where their mindset is.”

That includes seeing to some of their most basic needs.

“If I know a kid is hungry, I’ll pretend I packed too much lunch, or I’ll go to the cafeteria and buy an extra lunch because here in the shop students need to be focused or they’re going to get hurt,” Ward said.

“I absolutely see my role as a union president as advocating for the students,” Ward insists. “If we’re fighting to protect the teachers and the contract, that’s ultimately going to affect the kids.

“Make no mistake about it: my role as a union president is about advocating for the kids,” Ward explains. “And if there’s anyone at a school who is not fundamentally concerned with what’s best for our students, then they’re in the wrong business and they need to go.”

I see my role as a union president as advocating for the students.

“The kids don’t need to know that we’re fighting to get textbooks, resources, and quality staff,” Ward said. “They’ve got enough going on. That’s our job. As instructors, we have some power to make things better for our students. But as union members standing together, we have a lot more power to do what’s right for kids.”

The value of vocational education

Ward notes the misunderstanding that Vo-Tech is only good if you don’t want to go to college.”

“But that’s not true,” Ward cautions. “If  you go to a vocational technical school, you have a leg up at college. Students can earn up to 30 college credits during their time at Tech. We’ve had students go to MIT and other prestigious engineering schools.”

At the end of the school day, Ward transitions to his other job at Tech: servicing school buses. He oversees a team of mechanics who ensure that the district’s buses, as well as those from other sending districts, are well-maintained and safe.

By 8:30 p.m., Ward is ready for his final job of the day: nighttime guest instructor at technical schools across the state.

Amid all this, Ward juggles his responsibilities as union president.

As a result of his work ethic, sense of humor, rapport with students and staff, and dedication, Ward is a highly respected member of the Tech family. But he is cautious about commenting on his legacy.

When it comes to his mentors—the teachers who changed and, in Ward’s opinion, saved his life—Ward is humble.

“I think I made them proud.” 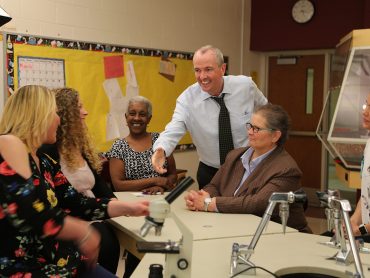 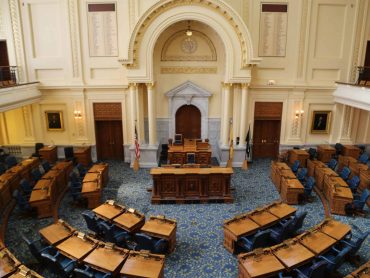