Every year in Nicholas Gattuso’s advanced software engineering class at Point Pleasant Borough High School, the students are given an assignment with a twist: they must build something that helps people.

“The reason I’m here as an educator is to help the students,” Gattuso said. “The thing that I’m trying to instill in my students is that we’re all here to make things better. It sounds Pollyanna, but I’m here to teach programming, to teach them passion and perseverance, but also to encourage them to do good. I’m trying to build the next generation of ambassadors who are creating software and tools that help people; that’s how we push humanity forward. Part of our role as educators is to help students become great people who care about society.”

Gattuso was inspired to enter teaching after the attacks on the United States on Sept. 11, 2001. 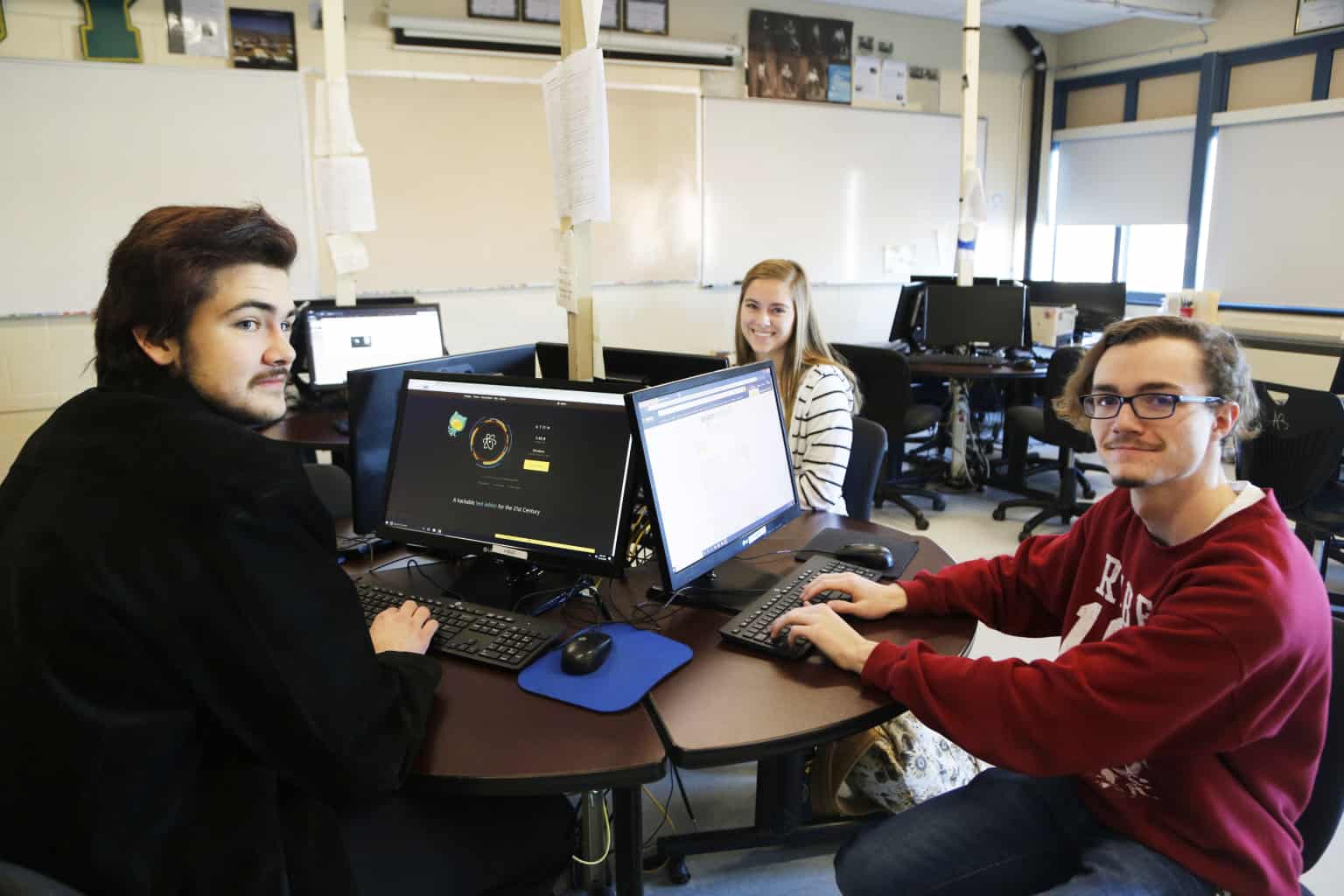 “I was 40 years old,” Gattuso recalled. “I was too old to be a police officer or a firefighter, so I decided being a teacher was the best way I could make a difference.”

Since then, Gattuso has juggled his roles as a parent, a computer programmer, and a teacher at both Point Pleasant Borough High School and Ocean County College.

Gattuso’s students regularly compete in programming competitions and have won numerous awards for their apps. In 2017, they were named the Congressional App Award Winner for Rep. Chris Smith (CD-4) and took third place in the high school division of the New Jersey STEAM Tank Championship. In 2018, Smith made a speech on the floor of the U.S. House of Representatives lauding the achievements of Gattuso and his students. In 2019, they were the Congressional App Award Winner for Rep. Andy Kim (CD-3) and had three apps that were named among the Top 10 in New Jersey’s STEAM Tank Championship.

In addition, Gattuso’s students have gone on to work at Google, Lyft, and Twitter—and they take with them Gattuso’s imperative that they work to make the world better and fairer.

Gattuso is committed to opening doors and providing opportunities for his students. Only about 7% of those working in the field of computer science are female, and that number is dropping. Gattuso makes an effort to recruit students. As a result, 40 to 50% of the students in his classes are female. 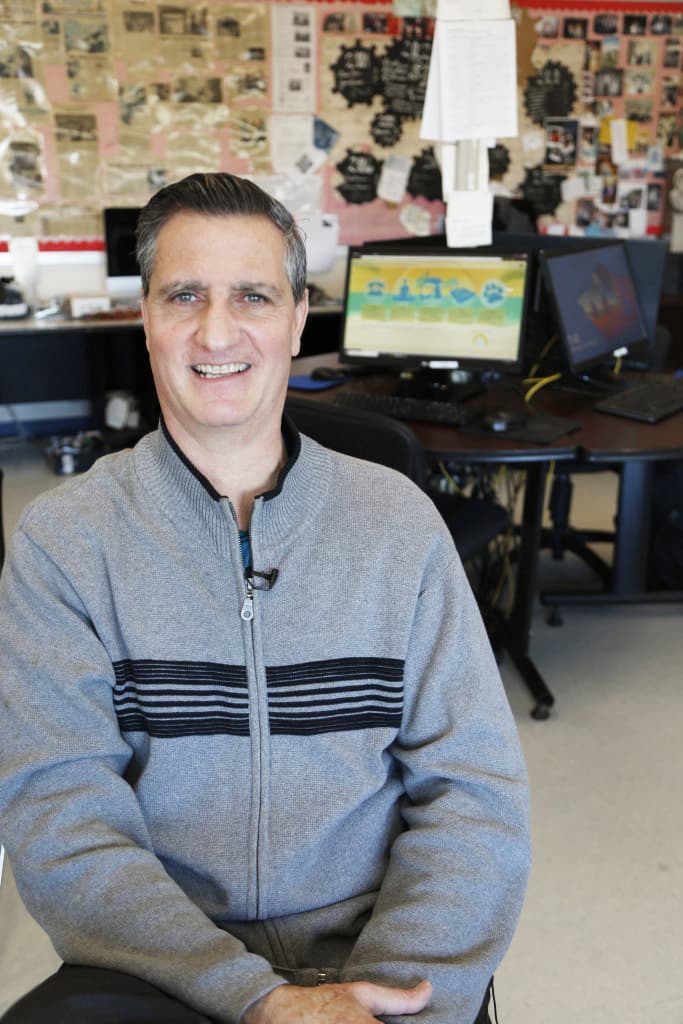 Apps for students with special needs

In the 2014-15 school year, Gattuso and his students embarked upon a project that had a major impact on them all. They decided to approach a special education teacher in the high school to ask if there were any tools she could use to help her students that the computer science class could build. The teacher was near tears when she heard the request because no one had ever asked her that before and because there were so few tools available to her students.

The first app developed for the special needs students was called the Measuring Cup Game. It taught students units of measure using an entertaining interface. The success of that app, and the many benefits of the collaboration, led to many other apps that help students do everything from understand the bell schedule to find someone to eat lunch with in the cafeteria.

That program, known collectively as the Panther Assisted Learning Software (PALS), was featured on NJEA’s “Classroom Closeup NJ” television program, won a Congressional award, and was featured in other media outlets. Those apps are still in use today.

One of the most recent apps developed in Gattuso’s class is on track to reach even further.

The Depression Anxiety and Wellness Network (DAWN) was conceived by then-senior Caroline Shea.

“I came up with the idea for the app in October 2018,” Shea said. “I drew on my personal life and took inspiration from my little sister who has OCD, anxiety, ADHD and depression.”

The app is a group of resources that students can access wherever they are, either alone or with a friend or family member. There are five main components to the app: 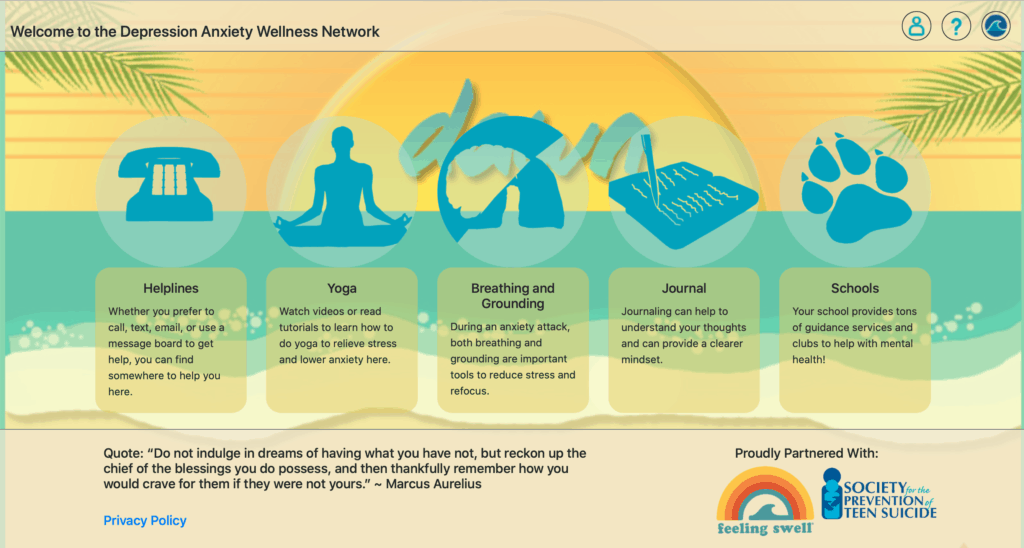 The Depression Anxiety Wellness Network (DAWN) app is a set of resources that students can access wherever they are, either alone or with a friend or family member. There are five main components to the app.

Caroline quickly brought in Joe Bobwski, another senior in the class who worked on programming the app. Over the next six months, they discussed ideas, made changes and talked about what the app could be.

Meanwhile, Caroline was working on expanding the reach of the app. She approached anyone she could think of who might have resources, expertise, or even just an interest in mental wellness. That brought her to Brian Barr, co-founder, along with his brother, Eric, of Feeling Swell, a classic surf inspired brand dedicated to building mentally healthy communities located in Point Pleasant.

“I quickly saw the value in the DAWN app because it shows that it’s OK to talk about this stuff and make mental health resources easily available to students,” Barr said. “It’s important that we’re talking about mental wellness in our school communities because kids are struggling; we all know someone who has to manage mental health issues.”

Barr and Feeling Swell collaborated with Caroline, Joe, and Jackson Perry, another Point Pleasant Borough senior who came on board and helped with design and other issues.

Caroline also brought in Dawn Doherty, the executive director for the Society for the Prevention of Teen Suicide. This organization, founded in 2005 by two families who lost a teenage child to suicide, focuses on education and awareness and working with schools and communities to provide resources.

“We love the app,” Doherty said. “We know the importance of young people getting behind mental health and wellness and we know that kids and teens are more likely to get behind something is developed by them.”

Doherty believes that the app is a great resource in part because it uses technology in a positive way.

“Technology is often blamed for children’s mental health issues, but it really is what you make of it,” Doherty said. “It can be an issue with respect to bullying and social media, but as with the DAWN app, you can use technology for good. Teens are using their phones; they’re using their laptops and tablets, so making these resources available to them where they’re at is very important.”

Support for the DAWN app continues to grow. Caroline, Joe, and Jackson presented the app to the superintendents of all Ocean County schools in the summer of 2019. Since then, they have presented to Hackensack Meridian who included information about the app in their newsletter and on their website.

“We’ve gotten a lot of positive feedback from kids in our own school who have used it and from administrators in other districts whose students are using it,” said Caroline.

A career where technology and compassion intersect

“Building something like this makes you realize that you don’t know what is really going on in anyone’s life,” Joe said. “Working on this app really made me feel very compassionate toward people who are struggling; it makes me feel good to do something to help them.”

Even as they move on to college, they will continue to have the support of Point Pleasant Borough Superintendent Vincent Smith and Gattuso.

“It takes a lot of courage for Caroline and others to talk about mental health issues,” Smith said. “I commend her for working with her classmates to develop this app and present it as a resource to others. This program and all of the tools that have been developed have been successful by any measure, and that’s down to the students and Mr. Gattuso.”

“When students leave my class, I want them to know that they never really leave,” Gattuso said. “We’re a community; alumni are still involved. We contact them for advice, networking, and we follow their college and professional careers.”

Gattuso takes his role as an educator and, often, father figure seriously.

“I want my students to know that someone cares about them,” he said. “A lot of students don’t have positive role models in their lives. I’m here because I care about them and because after 9/11 I wanted to make a difference. I teach my students the technical stuff, but I also want them to know they can come to me if they need help. If a student doesn’t have enough money for college, I’ll get on the phone and try to help them figure it out. They can contact me at all hours of the night if they get stuck on code. I want them to know and feel that they are part of something; that we have built something together, and that we are continuing to build.”

The NJEA Review visited Nicholas Gattuso’s class prior to the COVID-19 pandemic. After schools moved to remote learning, Gattuso wrote a piece on the transition to online instruction and the unexpected benefits he and his students encountered that appeared on NJEA’s website at njea.org/ppbdistance.

Society for the Prevention of Teen Suicide Resource Center
sprc.org