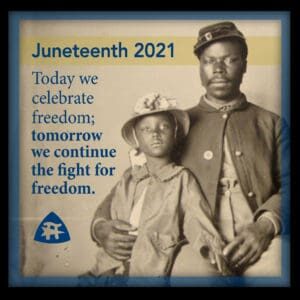 June 19, 2021 marks the 156th anniversary of the end of slavery in the United States. On this day more than 150 years ago, Major General Gordon Granger arrived in Galveston, Texas. He announced that the Civil War was over and that every enslaved person was free and had been in law, although not reality since the Emancipation Proclamation was signed by President Abraham Lincoln two and a half years earlier.

“The people of Texas are informed that in accordance with a Proclamation from the Executive of the United States, all slaves are free. This involves an absolute equality of rights and rights of property between former masters and slaves, and the connection heretofore existing between them becomes that between employer and hired laborer.”

With this announcement, the last enslaved people in the United States were free. Juneteenth, a name that derives from the combination of June and nineteenth, is widely celebrated as the day slavery ended in the United States. In September of 2020, Gov. Phil Murphy signed legislation officially recognizing Juneteenth as a public holiday in New Jersey and just this week President Joe Biden signed a law making it a federal holiday as well.

“We celebrate this day as the end of one of the most horrific chapters in the history of the world, the end of the enslavement of African people in the United States. Those enslaved people—the last of whom achieved their freedom on this day in 1865—built this country under harrowing conditions and without compensation or recognition. Yet they endured. What’s more, they did not endure in passive acceptance, as is too often assumed, but in a relentless push toward freedom. The human cost and lives lost during this more than 400-year fight for freedom are incalculable, and we reflect in mourning today on all that was lost.

“But today we also celebrate. We celebrate the unconquerable spirit of all those enslaved people who endured for the sake of a brighter future many of them would never see, but their descendants would. We lift up those ancestors and join in their fight against systemic racism and for true equity. We celebrate and pledge to emulate their resilience and constant pursuit of justice and freedom today. In this spirit, we renew our commitment to strive for racial justice within and outside of public education and to find joy and love in our unending quest to address and reverse the inequities that were built into the very foundation of this nation.”

“On this Juneteenth, as we reflect on the devastating impact that an unjust and unequal society has on far too many Black lives, we celebrate Black resilience. We are proud that New Jersey officially recognizes the significance of today for the first time, and we are inspired by Gov. Murphy’s continued pursuit of true racial equity. We lift up all those who continue to fight against racial injustice in all its countless and insidious forms. We call on all educators everywhere to dive into the work of educating ourselves and our students about the racial inequities that exist in our country. We will continue to use our collective union power to fight for justice in our schools, our communities and our lives.”

In support of this commitment, NJEA invites and encourages all members to join the REAL Movement for racial equity, affirmation and literacy.

PLEASE SHARE THIS
Facebook
Twitter
Email
Tags:Juneteenth
Thank you! Your message has been sent.
We apologize, but there was an error submitting your message. Please try again shortly.
Close Panel