Members of NJEA and other NEA affiliates across the nation are helping to build a national movement with parents and community allies to win funding to modernize school buildings. Their goals are to make schools healthy and safe, technologically upto- date and energy efficient. Modernizing schools is an investment that will pay off in multiple ways:

As NEA wrote in a recent letter to Congress, “It is shameful that today’s students must go to school in yesterday’s school buildings, with out-of-date technology and often unsafe, crumbling infrastructure.”

Daily threats to health and safety

NEA Vice President Lily Eskelsen appeared on Jan. 14 in a special report by CNN’s chief medical correspondent, Dr. Sanjay Gupta, about the national crisis caused by the poor condition of thousands of schools. The CNN report cited a survey showing that 40 percent of school nurses across the U.S. said they personally knew students made sick by the physical school environment.

Eskelsen shared research showing that one-third of school buildings have hazardous conditions that cause respiratory problems.

In December, the U.S. Environmental Protection Agency (EPA) held a training session about toxic polychlorinated biphenyls (PCBs) in New Jersey schools. An EPA toxicologist explained that PCBs can cause cancer, developmental problems, harm to immune systems, and other health impacts.

PCB exposure in schools comes mainly from window caulking and from certain T12 fluorescent lighting fixtures installed in schools built before 1980. Schools should replace those lighting fixtures now, both to protect students and staff and to save money on more energy efficient lighting, especially since replacement components will no longer be manufactured after the summer of 2012.

A representative from the N.J. Board of Public Utilities Clean Energy Program explained that under the Clean Energy Program and N.J. SmartStart Buildings, schools may be able to obtain energy audits and incentives for small building energy projects. Incentives include elementary school lighting upgrades and support for major energy improvements in larger buildings.

For more information, visit www.njsmartstartbuildings.com. During the training, a Medford school district representative described how energy efficiency upgrades in his small district have saved millions of dollars in fuel costs that can be used for other essential purposes.

In response to requests by NJEA and its allies, the New Jersey Legislature in 2008 approved $3.9 billion in bond financing to fund school construction projects – an investment that would be offset in part by tax revenue generated by the thousands of new jobs created by the program.

When Gov. Chris Christie took office in 2010, there were 53 new school projects already approved and designed by the Schools Development Authority.

Unfortunately, Christie ordered a halt to these projects. At a time when corporations have the largest reserves in history, the governor chose to give them $1 billion in new tax credits and loopholes, according to the New Jersey Policy Perspective research center.

Meanwhile, NEA is supporting a proposal in Congress – the FAST Act, or Fix America’s Schools Today (S1597/HR 2948) – that would make a $30 billion down payment on school modernization. The bill has been blocked by Republican leaders in Congress.

With the current political alignments in New Jersey and in Congress, we will need to build a grassroots movement strong enough to win major new investments in making our schools healthier, more energy efficient, and more technologically up to date.

You can join this effort by informing your coworkers, parents, and other community allies about the issue, writing letters to local newspapers, asking local school boards and parent teacher organizations to adopt resolutions, and encouraging everyone you know to contact elected public officials. 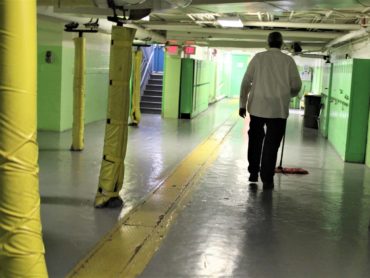