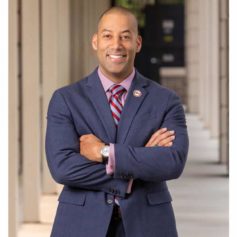 Sean M. Spiller, a high school science teacher in the Wayne public schools, is president of the New Jersey Education Association. Spiller was elected NJEA president in 2021, his term beginning on Sept. 1.

Spiller’s focus as a leader, throughout his service for NJEA, has been on helping members become more involved at the community level in confronting the intersection of challenges that affect public education and school employees, students, and their families. He sees the burdens placed on families with student debt, limited access to health care and underfunded communities as critical issues. As NJEA president, he aims to strengthen public education in New Jersey by confronting systemic racism, and building equity for social, economic, gender and sexual identity, and racial justice.

Thank you! Your message has been sent.
We apologize, but there was an error submitting your message. Please try again shortly.
Close Panel