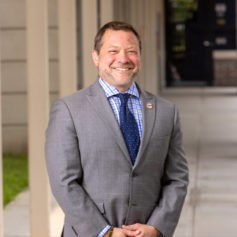 During his four-year term as NJEA Secretary-Treasurer, Beatty led in the fight to secure Chapter 78 relief, as well as ESP job justice legislation – now law.  He has spent his first four years as an NJEA officer traveling the state listening to members’ issues and needs, as well as heading up  NJEA’s 200K project, a member-led effort that made more than 400,000 phone calls and helped connect thousands of NJEA members with the work of the union. As an elected officer, Beatty has worked tirelessly to address the needs of all members, preservice to retired. He continues to work toward expanding collective bargaining rights, restoring a fair evaluation system and insuring full funding of public employee pensions.

As Vice President, Beatty passionately advances the fight for racial, social, and economic justice, works on NJEA organizational initiatives like “Undoing Racism,” NJEA’s Members of Color and REAL Movement, as well as LGBTQ+ curriculum implementation with partners Garden State Equality and the Bayard-Rustin Center. Beatty also chairs the NJEA ACEs Task Force and proudly works with Social and Emotional Learning For New Jersey (SEL4NJ) and the Rutgers Social-Emotional Character Development Lab. In addition, Beatty is playing an instrumental role in the establishment of the NJEA Preservice Academy, a program designed to further recruit and mentor potential members during their times as undergraduates in the college teacher preparation programs.

Prior to becoming an NJEA officer, Beatty served as president of the Somerset County Education Association (2013-17), and as president of the Bridgewater-Raritan Education Association (2004-17).  Beatty also held positions as second vice president, grievance chair, and a member of the negotiations team in Bridgewater-Raritan throughout his teaching career. At NJEA, Beatty acted as chair of the NJEA Government Relations Committee (2011-17), secretary-treasurer for the County Presidents Council, and represented Somerset County on the NJEA Delegate Assembly.

Beatty and his wife, Tamara, a teacher and president of the Cinnaminson Education Association, live in Martinsville with his two children, Morgan and Lindsay.  He is currently a Bridgewater Township Democratic Committeeman and active in both the Bernards Township and Bridgewater-Raritan Parent Teacher Organizations (PTO).

Thank you! Your message has been sent.
We apologize, but there was an error submitting your message. Please try again shortly.
Close Panel