The NJEA Equity Alliance Cadre has carried out more than 30 trainings over the past year, including this one in August 2018 in New Brunswick.

In July, a black ten-year-old boy in Michigan faced aggravated assault charges after a white classmate was hit in the head during a game of dodge ball at school.

In Florida, a black eleven-year-old boy was arrested for not standing and saying the Pledge of Allegiance, even though students were permitted to opt out of participating.

In New Jersey, there have been several well-publicized incidents of racial discrimination against students of color in school and at sporting events.

These are anecdotes, and it’s easy for some people to dismiss them with a “well, actually” and some information that may or may not be true to discredit them. So here are some facts.

A 2018 report by the Government Accountability Office (GAO), Congress’s nonpartisan research arm, found that black students in K-12 schools are far more likely to be disciplined—whether through suspension or referral to law enforcement—than their counterparts of other races.

While NorthJersey.com listed these five districts, they are not necessarily the districts with the widest gaps and certainly not the only ones.

ProPublica, a nonprofit news organization, found that New Jersey has one of the widest racial gaps in the nation. Using ProPublica’s data,
NorthJersey.com and USA Today found many instances of racial disparity in student discipline. For example:

If you are curious about racial discipline gaps in your own district, visit projects.propublica.org/miseducation/state/NJ. If you happen to live in Pennsylvania, Delaware or New York, and a wonder how the district where you live compares, simply change the last two letters of the web address to your state’s postal abbreviation. 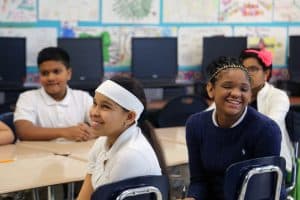 In May 2018, on the 64th anniversary of Brown v. Board of Education, a coalition of parents, students and civil rights groups sued the state of New Jersey in an effort to desegregate our public schools. More than 270,000 black and Latinx students in New Jersey attend schools that are more than 90 percent nonwhite. “Latinx” is a gender-neutral alternative to Latino. According to research done by UCLA, New Jersey is the sixth most-segregated state in the nation.

As educators, we have a responsibility to meet the needs of every child, but the fact is, we are falling short when it comes to children of color. We cannot improve the situation and address the failings in our system until we acknowledge them and work together to address them.

While we have so much to be proud of in New Jersey—our schools consistently rank first or second in the nation in almost every indicator—we have a responsibility to support every child in their educational careers to ensure they consistently have what they need to reach their full potential.

NJEA has been working to support educators and students in reaching their full potential through the Equity Alliance. For decades, NJEA has had committees dedicated to minority leadership and recruitment, sexual orientation and gender identity, exceptional children, urban education, women in education, and human and civil rights.

In 2018, NJEA combined these groups under the umbrella of the Equity Alliance and launched the first-ever joint conference in 2019.

In addition, the Equity Alliance created a cadre of members trained in restorative justice practices such as peace circles, conflict circles and other trainings. These trainers are available to work in school districts, with local and county associations, and have trained at NJEA’s Winter Leadership and Summer Leadership conferences. In November, they will be at the NJEA Convention. 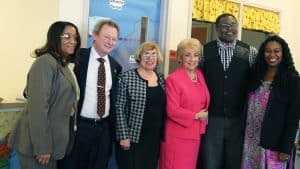 Currently, there are 12 members of the Equity Alliance cadre, and they have carried out more than 30 trainings over the course of the past year.

The goal of the cadre is to build an understanding among NJEA members and the public of the importance of racial and social justice, and to incorporate that knowledge and these practices into the classroom and in their relationships with colleagues. The cadre seeks to facilitate conversations in our neighborhoods that take on state and national issues.

Once people begin talking, you begin to build understanding, and after that trust. That is the critical groundwork we need to begin the hard work of breaking down these systems that unfairly target certain demographics of students.

At a cadre training, which can be held over multiple sessions, you begin with a peace circle. Peace circles have long roots in indigenous cultures. The peace circle opens the door for people to understand the goals and what the Equity Alliance is working to accomplish. While the issues that are behind the goals are widely discussed by many Americans, people have varying understandings of racial inequities.

No peace circle is the same, but what comes out of a circle can be a greater interest in minority leadership recruitment, restorative practices, the school-to-prison pipeline and cultural proficiency.

One of the things that can come out of Equity Alliance trainings is a deeper look at cultural proficiency—being conscious of the language we use and how it may affect people differently. For example, calling an African American male “boy” or tapping him on the head. Or how and why we separate students by gender and what we may unconsciously be signaling when we do that.

Another outcome is an improved understanding of cultural diversity. In these circles, we talk about the need for all students to have access to educators from diverse backgrounds. While it is well-documented, and of vital importance that children of color see themselves reflected in people with positions of authority in their lives, it is also critical, but far less discussed, that white children see people of color holding positions of authority.

Restorative practices have been covered in the October 2018 issue of the NJEA Review, which took a closer look at how Highland Park was implementing them. These strategies have been proven effective in reviewing district’s discipline policies to ensure that the outcome is not simply punitive but that both sides in a conflict emerge restored and can move forward in a positive way. Traditional disciplinary approaches often traumatize the perpetrator and the victim.

The school-to-prison pipeline is a system in which schools suspend students of color at a higher rate, leading them to expect punishment, detention, suspension, and eventually, prison. Many schools and educators, often unconsciously, perceive black male students as more threatening at a younger age, and treat them more harshly. Restorative practices can help address and end this crisis.

The goal of the Equity Alliance is to be intentional with how we achieve our goal of serving historically underserved students.

To build capacity, NJEA is encouraging these cadre members to accept any and every opportunity to train the community on these practices, including religious and community groups and other private organizations.

In June, NJEA staff began training on these issues with Nilka Julio from the National Education Association’s (NEA) Human and Civil Rights division.

One of the things that can come out of Equity Alliance trainings is a deeper look at cultural proficiency—being conscious of the language we use and how it may affect people differently.

In May 2018, Senator Shirley Turner (D-Mercer) and Senator Troy Singleton (D-Burlington) introduced S-2564. This bill establishes a three-year restorative justice program in the Department of Education that includes a trauma-informed approach. The goal of this pilot is to improve student outcomes and create a shift in school culture to ensure that the needs of students who have experienced trauma are met.

Using restorative justice practices in schools is an approach to discipline that focuses on repairing harm through inclusive processes that engage all stakeholders. While the trauma-informed approach focuses on the same principle, it also brings in neuroscience to understand the behaviors that restorative justice is looking to repair and the psychological intervention tools to prevent them.

Estimates show that over half of the students in our schools, regardless of socioeconomic status and background, have experienced adverse childhood experiences (ACES) and/or trauma, which is often unknown by the adults in schools. These experiences negatively affect a child’s ability to learn and can even have a permanently impact on their brain development. Looking at behavior as a symptom rather than the problem, combined with restorative justice disciplinary practices, breaks the cycle of trauma. This empowers students to help themselves and improves school climate and culture, which should lead to better outcomes in schools and in life.

A trauma-informed approach to restorative justice is a paradigm shift for schools. NJEA supports S-2564 and is eager to work with the Department of Education and the Legislature on this pilot program.

The bill was passed in the Senate on May 13 with 36 yes votes and four abstentions. As of press time, it awaits a floor vote in the Assembly, where it was introduced by Assemblypersons Daniel Benson (D-Mercer), Angela McKnight (D-Hudson) and Mila Jasey (D-Essex) as A-3519.

NJEA provides training to members who are interested in joining the Equity Alliance cadre. To learn more about the cadre, contact Gary Melton, at gmelton@njea.org.

What educators can do now

In spring 2013, Teaching Tolerance published a report on the school-to-prison pipeline and offered educators some strategies for ending the cycle. The report recommends:

Gary Melton Sr. is an associate director in the NJEA Executive Office. He is the staff contact to the NJEA Equity Alliance Cadre, the NJEA Human and Civil Rights Committee, the NJEA Minority Leadership and Recruitment Committee, and the Amistad Advisory Board. Prior to joining NJEA staff, he was a teacher at the Pennsylvania Avenue School in Atlantic City. There, Melton taught the Responsible Thinking class, which was designed to fight the school-to-prison pipeline.
He can be reached at gmelton@njea.org.