Noise in and near a school can expose staff to risk of hearing loss. Those at most risk include cafeteria workers, custodians and bus drivers as well as gym, shop and music teachers.

Noise in schools can be worsened by overcrowding, open floor plans, hard or high ceilings that create echoes, and having noisy areas located near instructional spaces. Noise outside of schools may include traffic, trains, aircraft, lawnmowers, construction and playground and athletic field activity. 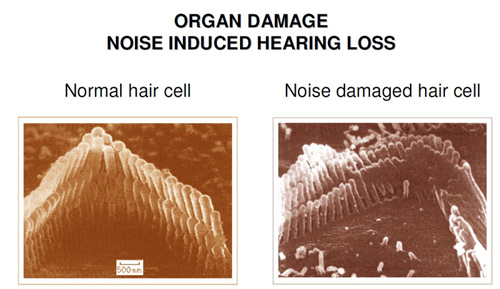 Hearing damage from noise adds up over time. It occurs when the tiny hair cells of the inner ear are destroyed. These cells conduct sound to the brain. Permanent noise-induced hearing loss cannot be corrected by surgery or hearing aids. Because the damage is usually gradual, a person might not notice it until it is severe. Signs of hearing loss can include:

All staff may be exposed to enough noise to cause stress, a contributor to increased blood pressure, heart disease, ulcers, reduced immune function, fatigue and irritability. Noise in the classroom can interfere with communication between staff and students, which can impair learning.

It is estimated that teachers use their voices for approximately 60 percent of their workday. The strain on the voice gets worse when the teacher has to talk over classroom noise. Studies have shown that teachers are 32 times more likely to have voice problems than people in similar occupations. Voice disorders may include hoarseness, discomfort when speaking, and tired, weak, effortful speech.

Noise is measured in decibels (dBA). Because the decibel scale is a logarithmic scale, doubling a noise causes an increase of 3 dBA. Doubling it again causes a rise of another 3dBA. Thus an 88dBA sound is twice as loud as an 85dBA sound. A sound of 94 dBA is 8 times louder than a sound of 85 dBA.

Within a room noise can be reduced by adding more “soft” materials, such as fabric-faced glass fiber wall panels, carpet, or acoustical ceiling tiles. Absorptive materials work best when spread throughout the room and not concentrated on just one wall or the floor or ceiling. Ceiling tiles should have a noise reduction coefficient (NRC) of 0.75 or higher. Other noise reduction measures include:

PLEASE SHARE THIS
Facebook
Twitter
Email
Tags:Noise
Thank you! Your message has been sent.
We apologize, but there was an error submitting your message. Please try again shortly.
Close Panel