Educators around the state honored as county teachers of the year serve as spokespersons and ambassadors for the profession. Leah Jerome, the 2019-20 Bergen County Teacher of the Year, pondered what she could do in her role to amplify the voices of the teachers in Bergen County and honor what they were doing in their classrooms.

Jerome knows firsthand how precious time is to a teacher. She didn’t want to ask them to give of their time and share their expertise without offering them something. Jerry Seinfeld’s “Comedians in Cars Getting Coffee” came to mind.

“What better way to engage in conversations with teachers than over a cup of coffee?” Jerome thought.

As a history teacher, Jerome learned that some of the world’s greatest revolutions had been born out of conversations started in coffeehouses. The English coffeehouses and French salons were the birthplace of Enlightenment thinking. She knew intellectual thought and discourse brew over a cup of coffee. Unlike other adult beverages that distort the thought process, coffee sharpens it and facilitates dialogue when shared between two people. In that spirit, her project Teachers in Classrooms Drinking Coffee was created. 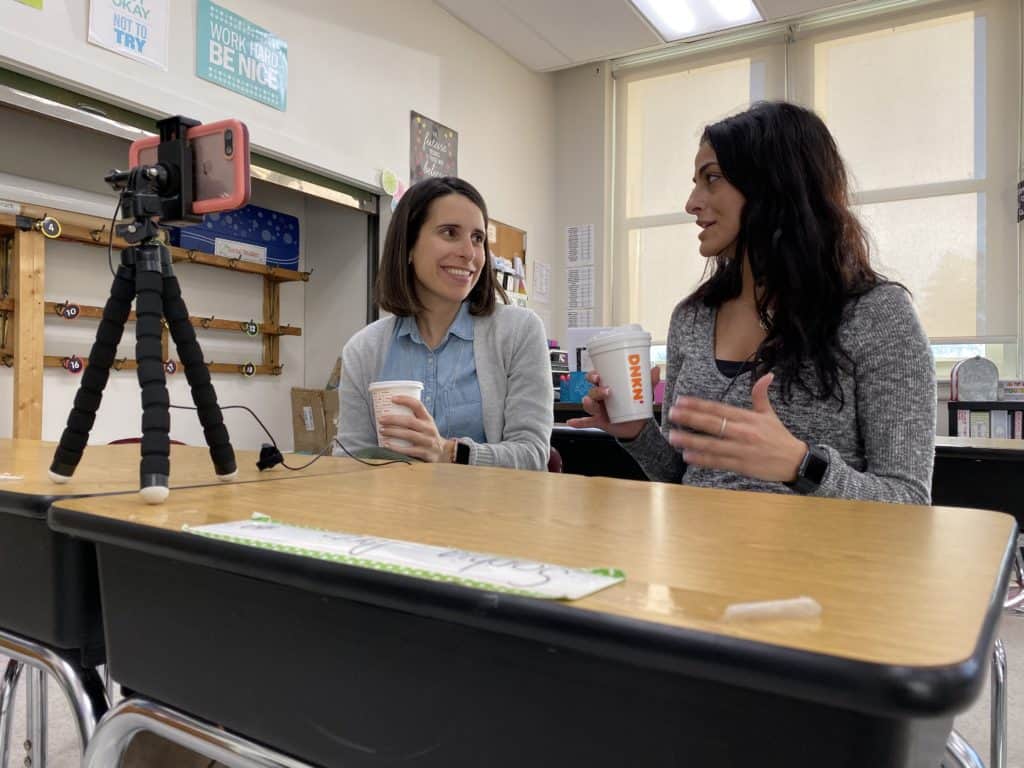 As the Bergen County Teacher of the Year, Jerome felt she should know what was going on in Bergen County’s schools. Now it was time to figure out the logistics. How could she execute meeting with teachers in each of the county’s 76 districts? She was determined to make it happen, calling it Mission 76.

Jerome did the math, realizing how expensive it might be to purchase a cup of coffee for herself and each of the teachers she would interview. She thought, “$3 per person, 76 districts… this could get costly!” She contacted Dunkin’ for assistance and they gave a generous donation to sponsor her project. She is grateful, she said, to the company for their support of public education.

Choosing which teachers to select for the project was a bit of a puzzle for Jerome. She chose teachers she knew personally and some noted in newspapers or other publications and websites. Some teachers reached out to her expressing interest once they learned about the project from other participants.

Jerome worked with her former principal at Pascack Valley High School, Thomas DeMaio, who was an integral part of helping her recruit teachers and refining the project.

“I was excited about us coming up with an idea that would highlight Bergen County,” said DeMaio. He knew the project would also be a great opportunity for Jerome to showcase how dynamic she is and to share what she does with other teachers around the county.

In order to complete the 76 interviews, Jerome met with teachers around the county before school, during preparation periods or lunch times, and after school, always bringing them their choice of brew. During each interview Jerome was enlightened, learning about the wonderful things teachers were doing.

One of the interviews was with Kristen Lindstrom of Pascack Valley High School, the school where Jerome currently teaches. Lindstrom conducted a beekeeping project that Jerome believed deserved recognition. If it were not for her coffee project, she wouldn’t have known about it.

Tara Skiba, an English teacher at Hackensack High School learned about the project through Twitter.

“I saw someone else post about the project,” Skiba said. “I thought it was so cool, and I emailed Leah to take part in it.”

In her interview, Skiba spoke about a new course she designed called “Exploring Sports Literature,” which is offered to seniors as a part of their English requirement. Students get a lot of literary choice in something called a book tasting. Skiba also spoke about teaching a Career in Education course for future educators. She was so inspired by Jerome’s project that she used it in her classroom, for the remainder of the school year as a tool. Skiba stressed, “What she’s doing is not only inspiring teachers, she’s also inspiring future generations of teachers as well.”

“I’ve known Leah Jerome professionally for some time and have always had tremendous respect for her as a teacher” said Dayna Orlak, social studies teacher/coordinator of gifted programs at Waldwick High School.

Jerome asked Orlak to take part in the project because of her work with TeachRock, created by an organization called the Rock and Roll Forever Foundation, started by Steven Van Zandt. Orlak travels around the world teaching curriculum so that nonmusic teachers can learn to incorporate music into their classrooms. Since working with TeachRock she has traveled with Van Zandt and his band throughout Europe, visiting 16 cities in 10 different countries. It’s been a great networking opportunity for her and she encourages other teachers to learn more about it at teachrock.org.

Daniel Willever, social studies teacher and Mock Trial/History Club adviser at Ramsey High School said Jerome reached out to him after seeing that he won the Milken Educator Award. He was a recipient in 2019. The Milken Educator Awards is an educator recognition program in the United States that provides unrestricted grants of $25,000 to teachers who demonstrate excellence and show tremendous promise in the profession.

Willever agreed to an interview with Jerome because they both wanted to elevate and celebrate good teachers. It was a bonus that they immediately connected because of their common role as social studies teachers and fed off each other’s energy.

“Leah is someone with such positive energy about teaching and social studies, that it was easy to engage in a conversation about teaching practices and promoting quality history education,” said Willever.

Although the original plan for conducting her project was interrupted by the COVID-19 pandemic, Jerome was able to accomplish Mission 76. The existence of virtual meeting spaces allowed her to interview one teacher in each of Bergen County’s 76 school districts. Jerome may not have been able to physically meet with each teacher, but she was still able to enjoy a cup of coffee and conversation with them in the virtual meeting space.

Everyone who worked with Jerome to complete the project noted how dynamic and caring she is.

“Leah genuinely cares for kids,” DeMaio said. “Kids sense those things. She is one of those teachers whom kids are drawn to. The way she teaches instills humanity, and the kids are enamored with it.”

“Leah asked thoughtful questions and was really invested in all of the interviews,” Skiba said. “She was everyone’s cheerleader.”

Although Orlak is older than Jerome, she shared that she looks up to her. “Her project was so brilliant because it highlights things teachers are doing that do not get press. There are so many amazing educators around Bergen County who aren’t recognized,” said Orlak. “She chose people who had interesting things to share and say.”

Jerome realizes teachers aren’t in the business of celebrating themselves and don’t realize how the things they do can greatly benefit other teachers, when shared. She wants educators to think about sharing what they are doing as a means of helping one another.

A modest Jerome says her efforts reflect a larger story—a great group of educators who thought to support teachers and amplify their voices. She thanks her cohort, the 20 other educators who were also county teachers of the year.

“They were very inspiring and supportive,” said Jerome. “We worked together and supported each other all year.”

Teachers in Classrooms Drinking Coffee was Jerome’s tribute to the teachers of Bergen County and a gift to educators everywhere. To see the interviews and learn about more of the amazing things going on in Bergen County schools, visit Jerome’s website teachersinclassroomsdrinkingcoffee.weebly.com.

Angel Boose is a third-grade teacher at the Benjamin Banneker Academy in the East Orange School District. She is the vice president of the East Orange Education Association and an NJEA Communications Consultant. Boose represents Essex County on the NJEA Women in Education Committee.