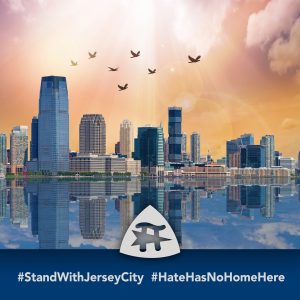 The New Jersey Education Association’s (NJEA) Delegate Assembly stands in solidarity with Jewish Americans and all persons of diverse religious beliefs in light of recent anti-Semitic violence and murder in Jersey City, New Jersey and Monsey, New York. Sadly, these are not isolated incidents. Reports of violence against individuals and groups based on their religion have been steadily increasing in recent years. As NJEA’s policy-making body consisting of representatives from throughout the state, the Delegate Assembly voted on Jan. 4 to make a formal statement denouncing such acts of violence and to explore ways to raise awareness of these crimes.

There is no place in New Jersey for hatred and violence, and no one should fear for their safety because of who they are, what they believe, and where or whether they pray. Since before its founding, the United States has stood as a beacon of religious freedom. America has become a nation to which those persecuted for their beliefs around the world seek refuge.

Residents of New Jersey can be proud to live in one of the most religiously diverse states in the nation, but according to the FBI’s Hate Crimes Statistics Report in 2018, there were 561 violent attacks classified as hate crimes in New Jersey. Of those, 198 were people targeted because of their religion. There is much work to do to make every school and every community free from violence motivated by hatred based upon religion, race and ethnicity, gender, gender identity, sexual orientation and all manifestations of irrational hatred.

As educators, NJEA members take seriously the responsibility to instill in their students an appreciation for religious diversity and to empower them to stand up against anti-Semitism and other forms of religious bigotry. Below are several resources for educators and parents to assist them in the that mission.

Resources for the Classroom
https://www.nj.gov/education/holocaust/resources/