A cancer cluster is a greater than expected occurrence of the same type of cancer cases in a group of people in a given workplace or geographical area. Every so often,members notice that cancer has been diagnosed in more than one co-worker and wonder if there is a local cause, that is, if the cancers constitute a cluster.

The issue naturally gives rise to a lot of fear and concern. While it is very difficult to pinpoint common causes for reasons outlined at the end of this article, it is important to take note of possible carcinogens or other hazardous materials in the school or environs and do what is possible to minimize them.

Even if acluster is unlikely or unprovable, members concerns should be taken seriouslyand not invalidated. Working with the UniServ field representative, localassociations can respond by reviewing potential exposures in the workplace, andfocus on making sure it is safe in the present, as described in the box. 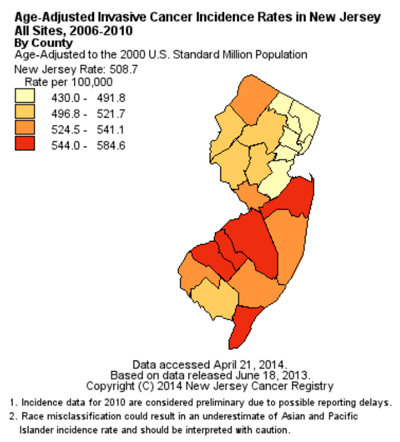 Why it’s hard to prove there’s a cancer cluster

It is hard to prove the association of an alleged cluster with a particular environmental chemical. For one thing, most cancers take many years, even decades to develop. Members may have had exposures that occurred many years earlier that they were unaware of or have forgotten. For example, there may have been hazardous pesticides used, especially before they were regulated in New Jersey schools in 2004.

Cancer is not one disease

Cancer is not one disease, but about 100 diseases, each with its own causes. In order to be a cluster, the cancers must be the same kind, and concentrated in one area or job title. Historically, studies have found occupational exposures associated with particular exposures, such as bladder cancer in certain dye workers and lung cancer in uranium miners. These were large populations of workers exposed over many years to the same carcinogens. Given that only a fraction of exposed people develop cancer, it is hard to detect a cluster in a small population (like staff of a school), especially if workers did not experience long-term repeated exposures.

A cluster is more likely if the cancer is rare. For example, some workers who worked with polyvinyl chloride suffered an otherwise very rare form of liver cancer, called angiocarcinoma.

In the 1970s there was great interest in researching suspected clusters of environmental cancers. Of all the studies done, only two have been proven in the United States—leukemia associated with industrial chemicals dumped in a river in Woburn Mass., and a similar set of exposures and childhood leukemia in Toms River, N.J. But the associations found in Toms River were tentative, even after years of study of correlations between local industrial chemicals, and health records. The main difficulty in proving correlation was the small exposed population.

Even inthe famous investigation initiated by Erin Brockovitch, the cancer rate of thepopulation she studied turned out to be lower than the rate of the generalpopulation.

Local associations can make sure the workplace is safe