On May 1, the New Jersey Retirees’ Education Association (NJREA) held its 100th Anniversary Celebration where members celebrated a century of service, activism and excellence. This joyous occasion was slated to be held in 2020 but was delayed by the COVID-19 pandemic. Two years later, the planning committee remained steadfast in making this an event to remember for the 350 people in attendance.

Since its founding on Jan. 13, 1920, NJREA, formerly known as the New Jersey Teachers’ Society of Annuitants and Pensioneers, has represented retired school employees and has been a beacon of service to public educators and public education. 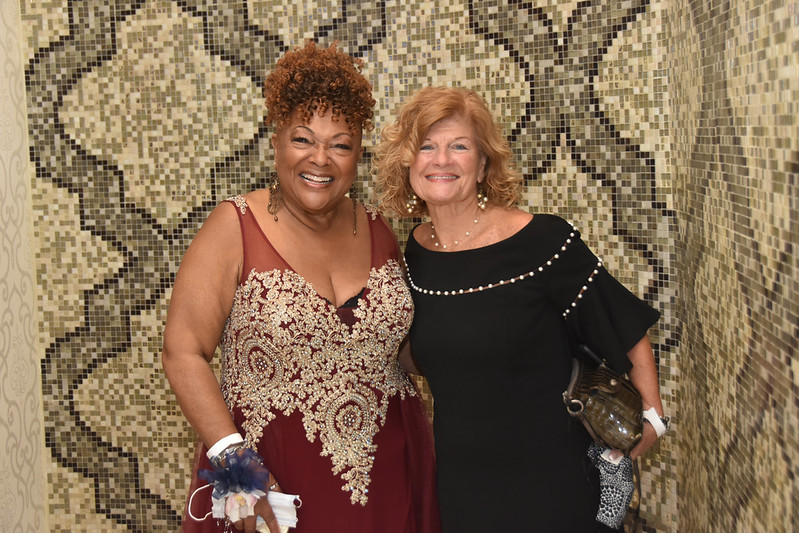 Hover over the image gallery to navigate through the album.

The program honored several trailblazers including Elizabeth Allen who founded NJREA, the 83 retired NJREA members who are 100 years old or older, and many others.

As guests arrived, they were welcomed with a walk down memory lane composed of historical photos and excerpts of various writings reproduced on tall panels. This allowed guests to recall their own journeys with employee rights, worker health and safety, and historical events that have shaped education.

The event opened with a welcome from NJREA President Joan Wright and NJREA First Vice President Kitty Sausa. They presented video messages from Gov. Phil Murphy and NEA President Becky Pringle, who were unable to attend.

“Although you all are retired from your positions, educators never retire from their professions.”

“New Jersey’s reputation for academic excellence is rooted in the work of the members of this organization,” Murphy said. “Although you all are retired from your positions, educators never retire from their professions.”

“’Life’s most persistent and urgent question is “What are you doing for others?’” Pringle said. “If there is anyone who can provide a substantive answer to the question posed decades ago by Dr. Martin Luther King Jr., it is you, the passionate, powerful and purposeful NJREA.”

The event was hosted by Arlene Pepe, an NJREA member from Morris County. During her opening remarks Pepe shared “Rules for Teachers –1915,” which were included in the event’s program. Those apocryphal rules included, “You must be home between the hours of 8 p.m. and 6 a.m. unless attending a school function,” and “You may under no circumstances dye your hair.” Pepe joked that she would be “OK” with the latter.

Members from near and far attended the celebration, including Carol Kadi who traveled from South Dakota to deliver the afternoon’s invocation. Kadi is a former NJREA treasurer, former Middlesex CREA president, former NJEA delegate, and former member of the Sayreville Education Association. Kadi mentioned how great it is to be back in New Jersey.

Throughout the celebration, in between meals and speakers, a few moments were taken to acknowledge and introduce attendees whom Pepe called “some very special people, some who we haven’t seen for a while.”

Guests had the honor to have three past NJREA presidents and its current president in one room celebrating the accomplishments of the organization: Rosemarie Jankowski, Patricia Provnick, Judith Perkins and Joan Wright.

“Roe” Jankowski was the first to be introduced, she thanked NJREA members for their support throughout her tenure and beyond.

Richard Gray, former NJEA assistant executive director, said, “Congratulations NJREA for this wonderful turnout celebrating one of the most important organizations in NJEA or related to NJEA.”

“Of course, I want to congratulate all the members of the NJREA and its leadership for the terrific job you’ve always done,” said Vince Giordano, former NJEA executive director. “I said it then and I say it now, if there was a group of people in the organization that you can always count on, whatever the need was, the NJREA was the first team you that you knew you could count on.”

“Here I am speaking to people who are committed to their profession, but you also fundamentally understood that it was the advocacy—the advocacy after those hours in our schools that really helped make a difference for our students as well,” NJEA President Sean M. Spiller said. He also noted that NJREA members are as committed now as they were before they retired to help those who have come to the profession after them.

“It is the love that we have for ourselves, each other, our profession, and the public good that makes us collectively strong,” said NJEA Vice President Steve Beatty. “When I enter a room with a legislator or policy maker, I know that they see the tens of thousands of active retirees who have our back, and that is why we are here to celebrate you.”

“It has been the joy of my work to be the liaison to the NJREA,” said NJEA Secretary-Treasurer Petal Robertson. “There truly is no better example of what it means to be union than people who are still willing to serve, to protect and to honor those students, classrooms and educators in ways that may not directly affect them. You have been a gift to our union.”

NJREA Membership Chair Fran Davis and NJREA Affiliations Chair Barbra Toczko, with the assistance of NJEA staff members Nello Ciccone and Chris Curto produced a video that gave guests what they called a “blast from the past, from a galaxy far far away.” Various NJREA members shared facts about successive decades in the association’s history starting with the 1920s. After each scene, Toczko asked the guests trivia questions about each succeeding era and handed out prizes when questions were answered correctly.

Two unexpected years in the making, the celebration provided moments of fellowship and reconnection. Throughout the afternoon, laughter and tears reverberated through the room as distant memories were recalled and “battle scars” remembered.

“One of the most special aspects of this event has been the ability to come together,” Spiller said. “But those two years allowed us, if nothing else, to appreciate that it is not a given that we get to come together.”

“Today we applaud you the backbone, the heart, and the soul of NJREA,” Perkins shared on behalf of Johnson. “NJEA relies so upon you and your strength to undertake issues important to both organizations.”

Perkins concluded the program with a familiar Irish blessing: “May the road rise up to meet you. May the wind be always at your back. May the sun shine warm upon your face; the rains fall soft upon your fields and until we meet again, may God hold you in the palm of his (or her) hand.”

Stephanie L. Natera is an associate director for public relations in the NJEA Communications Division. She can be reached at snatera@njea.org.